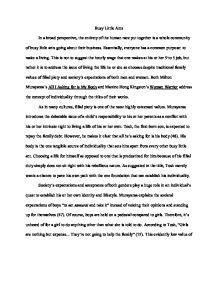 Busy Little Ants In a broad perspective, the entirety of the human race put together is a whole community of busy little ants going about their business. Essentially, everyone has a common purpose: to make a living. This is not to suggest the hourly wage that one makes at his or her 9 to 5 job, but rather it is to address the issue of living the life he or she so chooses despite traditional family values of filial piety and society's expectations of both men and women. Both Milton Murayama's All I Asking for is My Body and Maxine Hong Kingston's Woman Warrior address the concept of individuality through the titles of their works. As in many cultures, filial piety is one of the most highly esteemed values. Murayama introduces the debatable issue of a child's responsibility to his or her parents as a conflict with his or her intrinsic right to living a life of his or her own. ...read more.

Therefore, it's unheard of for a girl to do anything other than what she is told to do. According to Tosh, "Girls are nothing but expense...They're not going to help the family" (75). This evidently low value of women in general and the action of holding one's tongue renders both genders immobile to establishing their identity, let alone "Ask for their bodies." The struggle for women in any culture is an uphill climb. Therefore, it's not surprising that women would attempt to compensate for and overcome this struggle by becoming the perfect daughters. Kingston's title ties directly into her story of Fa Mu Lan, a woman warrior "who took her father's place in battle...and fought gloriously" (20). She brings honor to her village by leading her people to victory and satisfies her role as a wife and mother throughout the battle. Her actions render her the ideal filial daughter, unlike Kingston herself, whose "American life has been such a disappointment" (45). ...read more.

Murayama and Kingston demonstrate in their titles that a strong foundation must be asserted to attain a unique identity. Both filial expectations and societal acceptances hinder the abilities of men and women from paving their own paths. These traditional beliefs fuel the ideas that prevent one's individuality. Murayama's title focuses more on the inherent right of an individual to cherish and utilize his or her freedom of choosing his or her own life. Kingston, on the other hand, stresses the importance of an individual's actions to overcome the boundaries and struggles of society. Both authors emphasize the concept of individuality and its importance. All in all, Murayama and Kingston approach individuality and address the issue through the titles of their works. Both authors stress the influence of traditional beliefs, like filial piety as well as societal expectations of both genders. Society must ascertain and recognize the importance of each individual's hidden voice that is often times muffled beneath the facades of society's acceptance. This hidden voice is what distinguishes each busy little ant from another. ...read more.