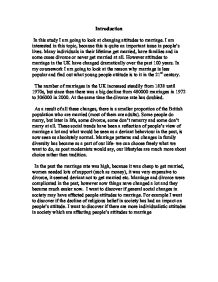 Introduction In this study I am going to look at changing attitudes to marriage. I am interested in this topic, because this is quite an important issue in people's lives. Many individuals in their lifetime get married, have families and in some cases divorce or never get married at all. However attitudes to marriage in the UK have changed dramatically over the past 100 years. In my coursework I am going to look at the reason why marriage is less popular and find out what young people attitude is to it in the 21st century. The number of marriages in the UK increased steadily from 1838 until 1970s, but since then there was a big decline from 480000 marriages in 1972 to 306000 in 2000. At the same time the divorce rate has doubled. As a result of all these changes, there is a smaller proportion of the British population who are married (most of them are adults). Some people do marry, but later in life, some divorce, some don't remarry and some don't marry at all. These social trends have been a reflection of people's view of marriage a lot and what would be seen as a deviant behaviour in the past, is now seen as absolutely normal. ...read more.

Advantages of using a self-completion questionnaire are that there few costs as I won't need interviewers; my response rate will be high; the results are going to be easy to compare; it less time consuming. As I mentioned in my introduction I am going to find out what young people think about marriage nowadays. So my sample is going to be a quota sample (this is when you are choosing people for your research with certain characteristics) - young boy and girls aged 16-22. I will ask people from the Filton College as the majority of students are the age I am aiming at. The number of people will be 20, 10 of them girls and 10 boys. My responders will be given a list of questions appropriate to the target of my research. Because everyone answers the same questions in the same order, the results are going to be easy to compare. I will use a mixture of closed and opened questions. I am aiming at a high response rate as my questionnaire will take maximum 3 minutes to complete, easy to read and understand and I am going to be there when the questions will be answered so I can answer people's questions if needed. ...read more.

From the answers of my responders we can see that most of them first would like to get some qualification first, putting success and independency in front. As we can see that there is a secularisation, some people do believe in God, but they are not influenced by it. The method I used to research was questionnaires. I chose this method, because questionnaires are more objective, certainly more than interviews. Questionnaires are familiar to most people. Nearly everyone has had some experience completing questionnaires and they generally do not make people apprehensive. Questionnaires reduce bias. The researcher's own opinions will not influence the respondent to answer questions in a certain manner. There are no verbal or visual clues to influence the respondent. Questionnaires are less intrusive than telephone or face-to-face surveys. My questionnaires were anonymous, so people being sure that their names are not going to be on the list were not afraid to tell the truth. The weaknesses were that some people found it not essential to explain their answers where they were asked to, and I could not come back to them as all questionnaires were anonymous. Some people might not tell the truth maybe finding questions about their plan too personal. Sometimes there were some problems with reading people handwriting. My sample was 20 people and the answers do not represent the whole country as everyone is different and the rest of the people might think in completely different way. ...read more.