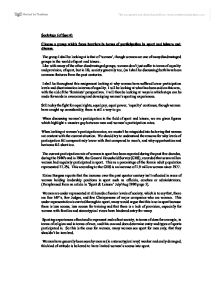 Choose a group which faces barriers in terms of participation in sport and leisure and discuss.

Sociology (of Sport) Choose a group which faces barriers in terms of participation in sport and leisure and discuss. The group I shall be looking at is that of 'women', though women are one of many disadvantaged groups in the world of sport and leisure. Like with many of the other disadvantaged groups, women don't just suffer in terms of equality and provision, of sport, but in life, society generally too, (as I shall be discussing) both have been common features from the past centuries. I shall be throughout this assignment looking at why women have suffered lower participation levels and discrimination in terms of equality. I will be looking at what has been said on this area, with the aid of the 'feminists' perspectives. I will then be looking at ways in which steps can be made forwards in overcoming and developing women's sporting experiences. Still today the fight for equal rights, equal pay, equal power, 'equality' continues, though women have caught up considerably, there is still a way to go. When discussing women's participation in the field of sport and leisure, we are given figures which highlight a massive gap between men and women's participation rates. When looking at women's participation rates, we mustn't be misguided into believing that women are content with the current situation. We should try to understand the reasons for why levels of participation fall comparatively lower with that compared to men's, and why opportunities and horizons fall short too. The current participation rate of women in sport has been reported during the past few decades, during the 1980's and in 1986, the General Household Survey (GHS), recorded that seven million women had regularly participated in sport. ...read more.

The feminists have/ can be categorised in to three groups, they are the Liberal, Marxist and the Radical feminists, all have varying views on feminism and the role of sport, the Liberal feminist who as a matter of fact accept capitalism, feel that there is a need to change the ideas about leisure, this can be related to a pluralist perspective. They believe that women don't participate because they feel, that men do the real work and that they deserve the leisure time and that their domestic work and child bearing/ caring is not as important, and they point out that how women feel guilty if they have free time, that they should be servicing the man and child's/children's needs, not their own. The Liberal feminists believe that women who reject the so-called 'natural role' think it means they are seen as uncaring. (Eappen: Lecture Notes). They have seen 'sexist' schooling practices as a reason for a possible low participation rate, and the media portrait of women in terms of sport has been a hindrance. 'Liberal feminist have argued that it is cultural conceptions of femininity, rather than any inherent limitations of women's bodies, that present the major obstacles to their full participation in physical activity.'(p240 Pininen). Then there comes the Marxist feminist, who don't accept capitalism, far from it, and believe that it is not possible to achieve total equality under capitalism, especially so in terms of gender, and then as far as sport is concerned equality is impossible. An argument they put forward for the low rates of participation is that women do most of the housework (women without paid employment) ...read more.

The current Great Britain women's hockey team is coached by a man for example. Also, only seven out of 167 Olympic Presidents are women. Elaine Burgess reports that The Sports Council believes 'it is important that women are given the opportunity and encouragement to achieve the highest positions of influence in sport, sport as a whole can benefit from the particular abilities and qualities women offer.' More initiatives are needed to help increase the number of women going into this direction, but how, through more targeting strategies and action such as the UK Action strategy, which has commenced on a UK Sports Council policy and action plan on women's leadership in sport, more initiatives and strategies at a national level are crucial. Other areas for future development include increasing the number of women entering and graduating from further and higher education courses in the sport and leisure scene. This will then mean more qualified women at a higher level. Continuing work from the Women's Sport Foundation in increasing awareness and opportunities is important. The key to all this argument points to role models, role models for women at all levels of the sporting agenda will surely help lift participation rates. Liberal feminists also believe that the government has some responsibility in doing something. (Lecture notes) The turn of the century saw women's involvement in competitive forms of sport limited to just a few appropriate sports. Though over the past couple of decades the number of sports now open to women has expanded greatly, but the fight for equality is far from won, as current levels of participation show, but with the help of the possible future developments and ways forward that I have mentioned we might see women coming closer than we ever imagined. ...read more.