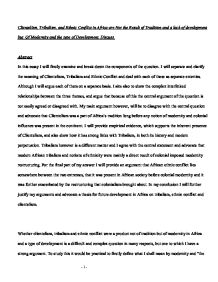 Clientelism, Tribalism, and Ethnic Conflict in Africa are Not the Result of Tradition and a lack of development but Of Modernity and the type of Development. Discuss.

Clientelism, Tribalism, and Ethnic Conflict in Africa are Not the Result of Tradition and a lack of development but Of Modernity and the type of Development. Discuss. Abstract In this essay I will firstly examine and break down the components of the question. I will separate and clarify the meaning of Clientelism, Tribalism and Ethnic Conflict and deal with each of these as separate enterties. Although I will argue each of them on a separate basis. I aim also to show the complex interlinked relationships between the three themes, and argue that because of this the central argument of the question is not easily agreed or disagreed with. My main argument however, will be to disagree with the central question and advocate that Clientelism was a part of Africa's tradition long before any notion of modernity and colonial influence was present in the continent. I will provide empirical evidence, which supports the inherent presence of Clientelism, and also show how it has strong links with Tribalism, in both its history and modern perpetuation. Tribalism however is a different matter and I agree with the central statement and advocate that modern African tribalism and notions of ethnicity were mainly a direct result of colonial imposed modernity restructuring. For the final part of my answer I will provide an argument that African ethnic conflict lies somewhere between the two extremes, that it was present in African society before colonial modernity and it was further exacerbated by the restructuring that colonialism brought about. In my conclusion I will further justify my arguments and advocate a thesis for future development in Africa on tribalism, ethnic conflict and clientelism. ...read more.

ordinary people and those with wealth or power."6 As before in pre-colonial society clientelism formed the basis of a persons power through the number of people he had domination and arrangements over, now in politics a persons political power is based on how many people pledge support through reciprocal client-patron networks in return for favours. Clientelism hasn't been formed it has merely morphed into a new generation of deals. "Where land was plentiful and populations small, wealth and power were measured in control of people, in having a large following of family and non-kin dependants."7 In politics this clientelism has become diverse, not created by modernity but adapted for its use in formal political positions. Peter Ekeh (1975) described this as being the formation in African society of two publics, where Clientelism has been and always is the norm. That the same political actors act in both systems of a Civic public and the Primordial public. The citizen in the Civic public works in the beaurocratic institutions of the state, in a supposedly amoral system. The citizen takes from his position and gives nothing in return. This is through clientelism and a network of contacts where state resources and power can be distributed in this way. However the same person in his Primordial public, largely associated with ethnic tribalism and belonging to an extended family/ community, gives out and gets nothing in return. Due to the kinship of this the actor is expected to do good for his own community, by using his political position. The key idea in Ekeh's case then is that the 'good man channels part of the largesse of the civic public to the primordial public.' ...read more.

With the arrival of colonialism I believe it was merely aggravated by the adaptation of formal tribes and the struggle in politics for scarce resources, power and recognition. I argue that it has merely adapted and become a more serious problem as the apparatus of state have been used to fight wars etc. The conflict now envelops far larger groups of people and even countries constructed by the colonial boundaries of ethnicity and country. Clientelism is pervasive throughout African politics. It is our normative viewing of clientelism today, as corruption in Africa that I believe has led to some believing it was is not in existence in pre-colonial society but a product of the introduction of formal politics and modernity in Africa. "of idealising the virtues of a pre-colonial era supposedly devoid of corruption, the growth of which is supposed to have been caused by the perversion of the social order induced by the arrival of colonialist Europeans."13 What I believe we must consider however that we are applying the principles of the old African order rather to a new context of modern development and democratic politics, etc where impartiality is presupposed. This is what makes us view clientelism as a modern phenomenon rather than its rightful place as a traditional form of dealings in African society. This is the opposite with tribalism, where many suppose it as a traditional part of African society. It was this European view of tribalism that thought of it as such, however closer examination reveals it to be a politically dynamic and deliberately constructed phenomenon. It was not a traditional aspect of society that was carried over into colonial modernity but a means by which if African created a concrete identity they could gain power and resources in a system which colonialism brought about. ...read more.