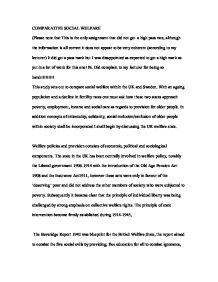 COMPARATIVE SOCIAL WELFARE (Please note that This is the only assignment that did not get a high pass rate, although the information is all correct it does not appear to be very coherent (according to my lecturer) It did get a pass mark but I was disappointed as expected to get a high mark as put in a lot of work for this one! Ps. Did complain to my lecturer for being so harsh!!!!!!!!! This study sets out to compare social welfare within the UK and Sweden. With an ageing population and a decline in fertility rates one must ask how these two states approach poverty, employment, income and social care as regards to provision for older people. In addition concepts of citizenship, solidarity, social inclusion/exclusion of older people within society shall be incorporated I shall begin by discussing the UK welfare state. Welfare policies and provision consists of economic, political and sociological components. The state in the UK has been centrally involved in welfare policy, notably the Liberal government 1906-1914 with the introduction of the Old Age Pension Act 1908 and the Insurance Act1911, however these acts were only in favour of the 'deserving' poor and did not address the other members of society who were subjected to poverty. Subsequently it became clear that the principle of individual liberty was being challenged by strong emphasis on collective welfare rights. The principle of state intervention become firmly established during 1914-1945, The Beveridge Report 1942 was blueprint for the British Welfare State, the report aimed to combat the five social evils by providing; free education for all to combat ignorance, NHS to combat disease, public housing to rent to combat squalor, state commitment to combat idleness and National Insurance benefits for all in need. These required the development of state services for citizens and they resulted in major extension of state responsibility and expenditure. ...read more.

Which brings us back to previously discussed policy spending and pensions for older people. Public spending policies, NSF and pensions in the UK One of the main sources of exclusion is the labour market pensions policies were implemented as a labour market device to encourage the exit of older workers, At present the government are mindful of the decline in the numbers of young people entering employment and the cost of pensions, the government is currently running campaigns to try to persuade employers to recruit or retain older workers through the new deal 50+ and other similar programmes. Older people face considerable discrimination from their employers i.e. age restrictions in job advertisements are a common barrier to employment, employers also restrict access to training programmes to workers under the age of 50, they also hold stereotypical attitudes towards older people i.e. they are hard to train, more cautious (hence slower), cannot adapt to new technology etc although there is no evidence of this, discrimination exerts a powerful influence over the life chances of older people. Such discriminatory attitudes not only offend social justice but increasingly at odds with Britians ageing population and the workforce. The British government has tried to combat such discrimination by educating employers, most recently via a voluntary code of practice about the value of recruiting and retaining older workers. Additionally, the European Directive requires that the present government is to enact anti-age-discrimination legislation by 2006. Pensions are one of the central social policy issues but they are also one of the most contentious because of their sheer scale and their escalating cost in an ageing society. Social security is by far the largest single expenditure programme in the UK and over half of it is devoted to older people. Older people form one of the largest groups of people living in poverty in the UK and are poorer than those in Sweden. ...read more.

For example, the Swedish welfare system is more inclusive, as it goes further than the UK in it's commitment, involves participation of females who are encouraged and supported within the workforce, with equal earnings as males and are equally entitled to benefits and pensions, this is in contrast with the UK welfare system, women are not treated as equals, they are discriminated against, for example women work part time, paid less than males, time rearing children and early retirement therefore have substantially less NI contributions as noted in the pension policy institute; "there will always be disadvantage with the pension system the UK has, which assumes people are employed throughout working life on a good income... women, disabled... are all disadvantaged. The current system produces significant underpensions." (PPI 27 Nov 2003) In addition strict eligibility restrictions formerly meant that only 60% of women had access to job protection and wage replacement. (Sainsbury, D. 1996). In conclusion, older peoples income determines their health and social living conditions this is why work history for income in later life is important, because it is during working life that entitlements to state, occupational and personal pensions are built together. Income is also an important and necessary resource for participation, especially in the domain of consumption, social networks and culture. Although Sweden as a social democratic state appears to retain more positive aspects compared to the UK's liberal model one must remember that it also has it's weaknesses, as a highly egalitarian welfare system can be too expensive and thus increasingly vulnerable in a global environment which seems to be forcing welfare retrenchment. In recent years Sweden has made enormous efforts to adjust their welfare systems to cope with different global economic and domestic pressure, without compromising their social corporate character. More emphasis has been placed on active labour market policies to ensure high levels of employment, benefits have been reduced a little, some privatisation of service delivery has taken place, and the Swedish pension reform has been quite far reaching and has moved towards the residual model of welfare which is also subject to a 'pension crisis'. ...read more.