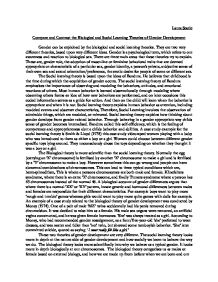 Laura Searle Compare and Contrast the Biological and Social Learning Theories of Gender Development Gender can be explained by the biological and social learning theories. They are two very different theories, based upon very different ideas. Gender is a psychological term, which refers to our awareness and reaction to biological sex. There are three main areas that these theories try to explain. These are, gender role, the adoption of masculine or feminine behavioral traits that are deemed appropriate or characteristic of a particular sex, gender identity, a person's private, subjective sense of their own sex and sexual orientation/preference, the erotic desire for people of same or different sex. The Social learning theory is based upon the ideas of Bandura. He believes that childhood is the time during which the acquisition of gender occurs. The social learning theory of Bandura emphasises the importance of observing and modeling the behaviors, attitudes, and emotional reactions of others. Most human behavior is learned observationally through modeling where observing others forms an idea of how new behaviors are performed, and on later occasions this coded information serves as a guide for action. ...read more.

For example boys want to play more 'rough and tumble' games whereas girls would want to play more quite games with dolls for example. An example of a case study related to the biological theory of gender development was conducted by Money (1974). One of a pair of male 'MZ' twins accidentally had his penis removed during circumcision. It was decided to raise him as a female. His male sex organs were removed, an artificial vagina constructed, and he was given female hormones. 'She' was always treated as a girl. According to Money, who had recommended gender reassignment, as a four/five-year-old 'she' preferred to wear dresses, and was neater and tidier than 'her' twin, but showed some tomboyish behavior. 'She' later committed suicide, quoted as saying ' I never really felt like a girl.' These two theories of gender development are very different. The social learning theory looks more in depth at the nature side of gender development and how socially we learn to behave the way we do. ...read more.