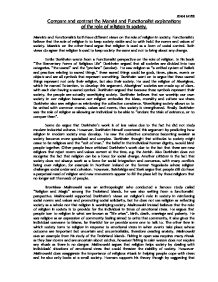 Compare and contrast the Marxist and Functionalist explanations of the role of religion in society.

JENNI SAYER Compare and contrast the Marxist and Functionalist explanations of the role of religion in society. Marxists and Functionalists both have different views on the role of religion in society. Functionalists believe that the role of religion is to keep society stable and to with hold the norms and values of society. Marxists on the other hand argue that religion is used as a form of social control. Both views do agree that religion is used to keep society the same and not to bring about any change. Emile Durkheim wrote from a Functionalist perspective on the role of religion. In his book "The Elementary Forms of Religious Life" Durkheim argued that all societies are divided into two categories, "the scared" and the "profane" (secular). He saw religion as "a unified system of beliefs and practices relating to sacred things," these sacred things could be gods, times, places, events or objects and are all symbols that represent something. Durkheim went on to argue that these sacred things represent not only their religion, but also their society. He used the religion of Aborigines, which he named Totemism, to develop this argument. Aborigines' societies are made up of clans, with each clan having a sacred symbol. Durkheim argued that because these symbols represent their society, the people are actually worshiping society. Durkheim believes that we worship our own society in our religion because our religion embodies the ideas, morality and culture we share. Durkheim also sees religion as reinforcing the collective conscience. Worshiping society allows us to be united with common morals, values and norms, thus society is strengthened. Finally Durkheim sees the role of religion as allowing an individual to be able to "endure the trials of existence, or to conquer them". ...read more.

Of course both Functionalist and Marxists are criticised. Firstly, Functionalists often ignore the dysfunctional side of religion, which Marxists highlight. Functionalists have the consensus view of society, whereas Marxists favour the conflict, therefore Functionalists do not see the role of religion in society as to suppress or control individuals. however, there is strong evidence of religion being divisive and disrupted like in Northern Ireland where religion has lead to years of serious conflict between Protestants and Catholics, there is also the Muslim and Hindu partition of India. As well as this Functionalists do not pick up on the point Marxists also high light, that religion can act as a comfort and allow them to accept injustice and inequality because they will be rewarded in the after life. However sociologists do support Functionalism. Robert Bellah developed the concept of civil religion by looking at the USA. In the USA there are a variety of faiths, but Americans are unified by a faith in Americanism. The USA have many symbols that could be considered sacred, like Durkheim's sacred symbols in Totemism, these include statues, places, songs and sayings, e.g. "God Bless America" and American coins reading "In God We trust", as well as oaths being said to the American flag. This supports Durkheim's theory that people are actually worshiping their society in religion and also supports the idea that religion can unite people. Other support for Functionalism includes it offering an account of the personal attraction of religious belief with people seeking reassurance from religion when things go wrong. Finally, religious practice and ritual also offers people a sense of comfort and unity at times of social stress, like bereavement. ...read more.

Many religions have a single prophet and there are numbers of charismatic leaders who have influenced people's religious belief in modern times. Weber offers a useful challenge to traditional Marxism, which is often too simplistic because only economic factors are considered. Weber also sees religion as a positive force of social change whereas Marxism and Functionalism do not. Finally, Weber offers us an understanding of the meaning of religion in people's lives. However, Weber's work has been criticised due to the fact he does not examine pre-Reformation Europe, where there were some very well developed capitalist structures, such as in Italy. Also, as Kautsky argues, some extreme Protestants were barred from a variety of professional occupations and so were forced into business. Finally, Sombart argues that Weber was mistaken about the beliefs held by Calvinists. He believes that Calvinists were against greed and the pursuit of money for their own sake. In conclusion, Marxism and Functionalism do disagree on the finer points of the role of religion in society. The Functionalist belief the role of religion is to provide social solidarity, value consensus and harmony, whereas from the Marxist perspective the role of religion is to maintain the social structure and ease the pain of oppression. Both views see religion's role as keeping society stable and not bringing about any social change. Weber's views provide a useful argument against this idea, viewing religion force of social change. All three views on religion are applicable to today's society, although it has changed somewhat from when many of the theories were written. The perspective give a deeper insight into the role of religion and allows religion to be seen not just as a practice that should be taken for granted, but as an having an influential role in the way society operates. ...read more.