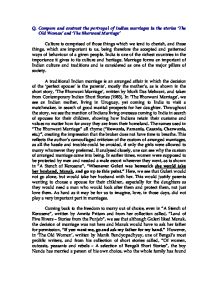 Q. Compare and contrast the portrayal of Indian marriages in the stories 'The Old Woman' and 'The Bhorwani Marriage' Culture is comprised of those things which we tend to cherish, and those things, which are important to us, being therefore the accepted and patterned ways of behaviour of a given people. India is one of the richest countries in the importance it gives to its culture and heritage. Marriage forms an important of Indian culture and traditions and is considered as one of the major pillars of society. A traditional Indian marriage is an arranged affair in which the decision of the 'perfect spouse' is the parents', mostly the mother's, as is shown in the short story, 'The Bhorwani Marriage', written by Murli Das Melwani, and taken from Contemporary Indian Short Stories (1983). In 'The Bhorwani Marriage', we see an Indian mother, living in Uruguay, yet coming to India to visit a matchmaker, in search of good marital prospects for her daughter. Throughout the story, we see the mention of Indians living overseas coming to India in search of spouses for their children, showing how Indians retain their customs and values no matter how far away they are from their homeland. The names used in "The Bhorwani Marriage" all rhyme ("Rowanis, Parnanis, Casanis, Charwanis, etc.)", creating the impression that the broker does not have time to breathe. This reflects the author's camouflaged criticism of the custom of arranged marriages, as all the hassle and trouble could be avoided, if only the girls were allowed to marry whomever they preferred. If analysed closely, one can see why the custom of arranged marriage came into being. In earlier times, women were supposed to be protected by men and needed a male escort wherever they went, as is shown in "A Stench of Kerosene", "Whenever Guleri was homesick she would take her husband, Manak, and go up to this point." Here, we see that Guleri would not go alone, but would take her husband with her. ...read more.

personal liking, it was not he, but the wife who suffered, simply because he was the "son" and earned money for the family. This also shows the position of women, as for Orthodox Indians, anything and everything is always the girl's/woman's fault, even though any person with eyes can clearly see that the son or anyone else is in the wrong. The writer here says, "Who would keep a woman with so many faults and so much ill luck?" speaking in the voice of the family members, showing, through sarcasm, his dislike of this idea of blaming the woman for others' faults/mistakes, including Nanda's death. In "The Bhorwani Marriage", there is a lot of emphasis paid to the girl's physical appearance, showing how good looks were a main criteria in the selection of girls falling in the 'marriageable material' category. The writer mentions, "She was thin and dark. Boys nowadays demand a white skin even if the features of the girl are not striking. No doubt her thinness could be to her advantage." This goes on and is mentioned in other places too, showing how most men (or their mothers), no matter how ugly they (or their sons) were, demanded, slim, good-looking girls. In "The Old Woman", however, there are absolutely no references to any physical aspect of the girl's appearance, although there is a lot of importance given to the fact that she was a "grown girl", the use of which itself shows the story's 'non-Western' nature, as this phrase is something typically Indian and not used in British or American English. The reason behind the dislike associated with marrying a "grown girl" was probably that it is a lot harder for someone to mould a grown person who had her own ideologies and personality. When a younger girl comes into the family, she can be easily influenced by the in-laws into being the sort of person they would want her to be, which is a lot harder or impossible to do with a grown girl. ...read more.

This could signify a lot of things, mainly showing how her roots are deeply ingrained in the household. Also, since a tree is a life-giver, the writer could be implying how people who are able to change, like the old woman, can nourish and give life to the Indian society, which is withering due to the strict following of backward values, which were probably suitable for the time of their origination, but are not apt for modern days. Most Indian marriages are arranged, even in modern times, as change occurs very slowly in a society like India's and is usually unwelcome. However, it is surprising when one compares the number of successful marriages to the number of unsuccessful ones. Nevertheless, we see this custom being criticised in "The Bhorwani Marriage" where, through reading between the lines, we realise that the writer criticises his profession and seems to dislike it, except for the money to be made in the business, which is quite a lot. The writers, Melwani and Bandyopadhyay, both show their dislike of the custom of dowry, although Melwani portrays it in a rather sarcastically humorous way, like the rest of his ideas, whereas Bandyopadhyay is more serious in highlighting the consequences suffered by brides whose families do not or cannot afford to pay high dowries. I find this idea degrading to women, and unsuitable for modern days, as it is high time that people changed their medieval ideas and tuned in with time. Women are paraded in front of prospective suitors, and being rejected can often be quite hard on one's self-esteem. However, in "The Old Woman", we see what the girl goes through even after her marriage was not arranged, making us realise that change has to come about drastically, as having one or two people change their minds would not really help as like with Menaka, it would lead to discrimination within the family. Both the writers have made their points quite vividly and have portrayed the Indian culture very effectively, but writing in such a way, that their personal opinions are clearly visible. ...read more.