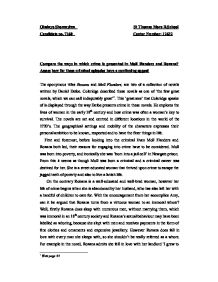 Compare the ways in which crime is presented in Moll Flanders and Roxana?Assess how far these criminal episodes have a continuing appeal

Oladayo Shomuyiwa St Thomas More R.School Candidate no. 7160 Center Number: 12632 Compare the ways in which crime is presented in Moll Flanders and Roxana? Assess how far these criminal episodes have a continuing appeal The eponymous titles Roxana and Moll Flanders, are two of a collection of novels written by Daniel Defoe. Coleridge described these novels as one of 'the few great novels, which we can call indisputably great'1. This 'greatness' that Coleridge speaks of is displayed through the way Defoe presents crime in these novels. He explores the lives of women in the early 18th century and how crime was often a woman's key to survival. The novels are set and centred in different locations in the world of the 1720's. The geographical settings and mobility of the characters expresses their personal ambition to be known, respected and to have the finer things in life. First and foremost, before looking into the criminal lives Moll Flanders and Roxana both led, their reasons for engaging into crime have to be considered. Moll was born into poverty, and ironically she was 'born into a jail cell' in Newgate prison. From this it seems as though Moll was born a criminal and a criminal career was destined for her. She is a street educated woman that thrived upon crime to escape the jagged teeth of poverty and also to live a lavish life. On the contrary Roxana is a well-educated and well-bred woman, however her life of crime begins when she is abandoned by her husband, who has also left her with a handful of children to care for. With the encouragement from her accomplice Amy, can it be argued that Roxana turns from a virtuous woman to an immoral whore? ...read more.

dreadful necessity of circumstances is the cause', express this, the word 'dreadful' is emotive as the reader pity's Moll's well being, The 'circumstances' Moll speaks of, are due to many factors such as the absences of any parental figures for example, since her mother is a criminal, the reader may not be surprised that Moll takes a criminal path for her career. In sociological terms a poor level of cultural reproduction, could explain why Moll follows her mothers footsteps. Crime is presented with the association of the devil's works. Firstly it has to be considered that crime in the 18th century was often seen either as the work or the influence of the devil, considering at this period people tended to be very superstitious. In Moll Flanders, Moll believes the crimes she commits are caused by the devil- 'She had enough to work on but the devil sends her out unto the streets'. This use of imagery is effective because Moll personifies the devil as a person who forcefully dragged her onto the street to steal. Moll also refers to herself as a 'busy devil'. The language used here is unusual as the word busy often refers to hard work or a dedication to work, whereas the word devil contradicts the word busy, as the devil is associated with evil or negative works, which causes an overall effect of irony. In Roxana, Roxana prostitutes Amy to her landlord; after Roxana realizes that what she did was immoral and indeed a sin she says she is the 'instrument of the devil's works'. This has a continuing appeal because the reader shocked that Roxana, supposedly a woman of virtue forces Amy, her closest friend, and 'pimps' her to her landlord. ...read more.

don't ask themselves why a certain percentage of the population is destitute, they just want to make sure they are not one of them. However their determination not to be destitute shows their survival instincts. Also Defoe shows the emergence of an individualistic society where people began to develop their own norms and values and tended not to look at traditional institutions such as the church for guidance and rather they'd take matters into their own hands. The relationship between crime and identity has to be explored. For example Moll is a common slang term in these times for a woman of low repute, often the girlfriend of a professional thief, 'Flanders' was a term to describe women in prostitution. Roaxna Turkish dress reveals her criminal identity as a courtesan. It interesting as their names are clear indications of their true identities and purposes but none of the characters realize this. In Roxana where Roxana leaves her lavish life momentarily, she takes up Quaker dressing. This way of dressing is a drastic change from her lavish gorgeous dresses, which emphasis the change from her high life and erotic encounters to a simple way of living. Roxana and Moll Flanders hide away behind their names and costumes to protect their identity, their hidden identities explain that they are afraid and do not want to face up to who they and they're afraid of how people will react to them like the character Robinson Crusoe. Defoe creates characters similar to how he felt about himself as he even changed his name from Foe to Defoe, which suggests that Defoe feels the struggle and can sympathise with what his protagonists go through. 1 Watt page 93 2 Introduction, Moll Flanders page 8 3 Introduction, Moll Flanders page 11 ...read more.