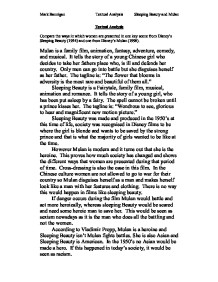 Textual Analysis Compare the ways in which women are presented in one key scene from Disney's Sleeping Beauty (1954) and one from Disney's Mulan (1998). Mulan is a family film, animation, fantasy, adventure, comedy, and musical. It tells the story of a young Chinese girl who decides to take her fathers place who, is ill and defends her country. Only men can go into battle but she disguises herself as her father. The tagline is: "The flower that blooms in adversity is the most rare and beautiful of them all." Sleeping Beauty is a Fairytale, family film, musical, animation and romance. It tells the story of a young girl, who has been put asleep by a fairy. ...read more.

Cross-dressing is also the case in this film. In the Chinese culture women are not allowed to go to war for their country so Mulan disguises herself as a man and makes herself look like a man with her features and clothing. There is no way this would happen in films like sleeping beauty. If danger occurs during the film Mulan would battle and act more heroically, whereas sleeping Beauty would be scared and need some heroic man to save her. This would be seen as sexism nowadays as it is the man who does all the battling and not the women. According to Vladimir Propp, Mulan is a heroine and Sleeping Beauty isn't Mulan fights battles. ...read more.

This brings the question to the audiences mind on who is stronger men or women and who should be head of the household. This shows the differences in society and that in the earlier years, films were brought out for the young blonde girl to be saved by the heroic prince and that was what people wanted to be like. In Mulan there are Asian heroes, which wasn't recognised at the time of sleeping Beauty. Also, in Mulan the active and stronger character is female and it shows that today's society is more equal. Today's society is more equal for men and women and the scenes I studied in Sleeping Beauty and Mulan show that women were presented in a very different ways. ?? ?? ?? ?? Mark Bannigan Textual Analysis Sleeping Beauty and Mulan ...read more.