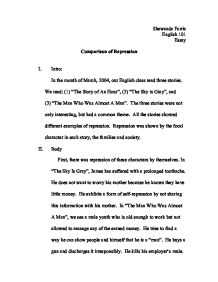 Shewanda Farris English 101 Essay Comparison of Repression I. Intro: In the month of March, 2004, our English class read three stories. We read: (1) "The Story of An Hour", (2) "The Sky is Gray", and (3) "The Man Who Was Almost A Man". The three stories were not only interesting, but had a common theme. All the stories showed different examples of repression. Repression was shown by the focal character in each story, the families and society. II. Body First, there was repression of these characters by themselves. In "The Sky Is Gray", James has suffered with a prolonged toothache. He does not want to worry his mother because he knows they have little money. ...read more.

When Louise learns that her husband has been "killed", she seeks solitude to grieve, but instead finds comfort in the realization that she is "free" to live her own life. She realizes she is out from under the strong hold of her domineering husband. When she returns downstairs to the support of her sister and friend, only to find her husband walking through the door. She is startled that she drops dead. She had repressed her own feelings for so long that death held more appeal for her than continuing the life her husband had insisted she live. The stories portrayed repression by a family member, also. In "The Sky is Gray", James was repressed by his mother because she always wanted him to learn by tough love. ...read more.

In "The Man Who Was Almost a Man", society repressed Dave by treating him like a child, and not allowing him to become a man. III. Conclusion Although repressed by self, family and society, these characters had a chance to escape repression and in there own way, they accomplished this task. James, in "The Sky is Gray", realized the value of hard work and is being responsible for self and family. Dave, in "The Man Who Was Almost A Man", decided to attempt to become a man in a new and different town. Louise, in "The Story of An Hour", was unable to enjoy her newly discovered freedom due to death. Ironically, James, Dave, and Louise were able to overcome their repression through different means. ...read more.