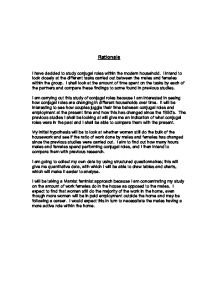 Conjugal roles within the modern household

Rationale I have decided to study conjugal roles within the modern household. I intend to look closely at the different tasks carried out between the males and females within the group. I shall look at the amount of time spent on the tasks by each of the partners and compare these findings to some found in previous studies. I am carrying out this study of conjugal roles because I am interested in seeing how conjugal roles are changing in different households over time. It will be interesting to see how couples juggle their time between conjugal roles and employment at the present time and how this has changed since the 1950's. The previous studies I shall be looking at will give me an indication of what conjugal roles were in the past and I shall be able to compare them with the present. My initial hypothesis will be to look at whether women still do the bulk of the housework and see if the ratio of work done by males and females has changed since the previous studies were carried out. I aim to find out how many hours males and females spend performing conjugal roles, and I then intend to compare them with previous research. I am going to collect my own data by using structured questionnaires; this will give me quantitative data, with which I will be able to draw tables and charts, which will make it easier to analyse. I will be taking a Marxist feminist approach because I am concentrating my study on the amount of work females do in the house as opposed to the males. ...read more.

These generally involve asking respondents to record their activities for a specified time interval over a number of days, or have them keep diaries registering the number and nature of tasks performed. The findings are generally remarkably consistent but it would have given me qualitative data, which I could not draw causal laws from, and it would have taken a lot longer to analyse. I may have also had to change my theoretical perspective to do this type of study. The Structural Functionalist view of the conjugal relationship is that of a well-balanced couple, each person has a specific set of mutually agreed and integrated tasks to perform. There are several reasons for the divisions of labour, usually a combination of gender, class and occupation, all of which combine to determine the couples activity. There is normally a clear division between the jobs of the home and family and the jobs of work, normally headed by the male who then assumes the position of breadwinner, and the female who becomes in-charge of the housework. However, since about the 1950's this traditional account of the division of conjugal roles has come under a lot of criticism for several reasons. The starting point for the criticism on the changing roles is Elizabeth Bott's work, "Family and Social Networks". Bott distinguishes between two types of conjugal roles, segregated and joint. She studied 128 working class and middle class couples and found that they both had segregated conjugal roles. In the segregated case, men and women have a clear differentiation of tasks, and a huge number of separate interests and activities. In the joint relationship many tasks are carried out together with little task difference and separation of interests. ...read more.

two thirds of them replied "yes". This suggested that the males are in general satisfied with the shared workload between them and their partners. However, when the females were asked "does your partner think that when they do help with the domestic tasks that they are doing you a favor"? five out of six replied "yes". The other one replied "sometimes". This suggests to me that there is some conflict between the sexes as to what is a suitable amount of work for each of them. As for the change from segregated to conjugal roles, it seems that they have not changed that much since Anne Oakley's study in 1974. The responses I got showed that two thirds of my respondents still felt they had segregated conjugal roles and only two of the six couples felt they had joined conjugal roles. Over all I can see that there has been a consistent change in conjugal roles since the 1950's. This change has resulted from a change in society, the family and the way the family functions in society. The new opportunities available to women have enabled the family to increase in its diversity. These changes were inevitable, as women would not put up with looking after the house while the male goes out to be the breadwinner. The traditionalists view of the "cereal packet family" is becoming a feature of the past and the new type of family with some joined roles in housework and childcare and shared interests between both males and females are revolutionising the family. There has been a steady change over the last fifty years that has seen the males take a more active position in carrying out conjugal roles and it likely this change will continue for coming generations. ...read more.