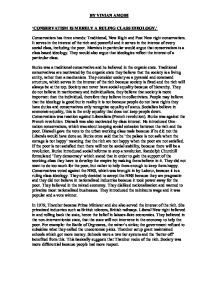 'CONSERVATISM IS MERELY A RULING CLASS IDEOLOGY.' Conservatism has three strands: Traditional, New Right and Post New right conservatism. It serves in the interest of the rich and powerful and it serves in the interest of every social class, including the poor. Marxists in particular would argue that conservatism is a class based ideology. They would also argue that ideologies reflect the interest of a particular class. Burke was a traditional conservative and he believed in the organic state. Traditional conservatives are motivated by the organic state they believe that the society is a living entity, rather than a mechanism. They consider society as a pyramid and command structure, which serves in the interest of the rich because society is fixed and the rich will always be at the top. Society can never have social equality because of hierarchy. They do not believe in meritocracy and individualism, they believe that society is more important than the individual, therefore they believe in collectivism. ...read more.

They believed in the mixed economy. They disliked nationalization and wanted to privatize most nationalized businesses. They introduced the minimum wage and it was popular and a vote winner. In 1979, Thatcher became Prime Minister and she also served the interest of the rich. She privatized industries such as British telecom, British railways. Liberal New right believed in and rolling back the state, hence the belief in laissez-faire economics. They believed in the non-interventionist state, that the state will not intervene in the economy to help the poor. For example: the Battle of Orgreaves, the miner's strike; the government refused to subsidize what they called the uneconomic picks. Thatcher setup grant maintained schools which got more money. Schools were a two tier system and the 'better-off' benefited from this. This basically suggests that Thatcher reeks of the rich. Society was more differential because people had more respect. Disraeli introduced one-nation conservatism, and he was genuinely concerned about the poor, evidenced in his quote, 'there is a gap between the rich and the poor' and his Crystal Palace speech. ...read more.

Cameron has adopted and fused neo-liberalism with elements of One-nation. Cameron believes in social responsibility. This means that society has to work together to look after and care for each other, however if we care for each other the government will not help us. For example: Jamie Oliver; it was not the government that improved school dinners. Social responsibility is a way of saying 'rolling back the state', Cameron uses One-nation rhetoric, though he still wants a smaller state, he does not want to regulate the state. He wants to take politicians out of the NHS. He fused neo-liberal elements and one-nation because he cares about the economy, example targeting families who have to pay child-minders; instead they pay money to family relatives to look after your children. This is One-nation because keeps social cohesion. In 1979, the working-class voted Thatcher in because in 1983, the Conservatives promised that people could buy council houses and Labour said they would nationalize the banks. Thatcher would win because she had taken on the Falklands war and found victory. BY VIVIAN AMOBI ...read more.