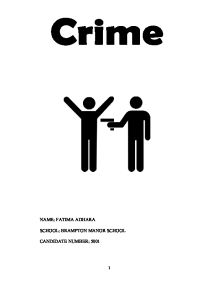 Also for my secondary research I would try to leave myself spare time so I could find better results for my secondary research. I managed to meet most of my aims; the 1st one "I aim to find out weather the media does actually does portray ethnic minorities in a negative way" I managed to meet this aim because this was my hypothesis and I actually did prove my hypothesis. 2nd aim was "I aim to investigate what reasons arise when ethnic minorities are portrayed in a negative way" I also met this aim because the reason which arise when ethnic minorities are portrayed in a negative way are that ethnic minorities are uneducated, they turn to crime because they have no money etc. 3rd aim was "I will use primary research to find out other peoples opinions and if people do agree with what I aim to find out" I also met this aim because thanks to my secondary research I got hope that my hypothesis can be proven, because of the results I got back. 4th aim was "I will use secondary research to help make my points stronger with strong proof to backup my points" I didn't completely meet this aim although I did find some proof to backup my points but I believe I could have done more if I had time. 5th aim was "I will try my best to prove my hypothesis" I did try my best I done all I could to prove my hypothesis and I did prove my hypothesis. Overall I believe I have managed to meet all my aims and complete them too. Image 1 http://i11.photobucket.com/albums/a161/Sn4ke22/grand_theft_auto_iv_video_game_imag.jpg Image 2 http://www.enterthebabylonsystem.com/wp-content/uploads/2007/02/cj-two-tecs.jpg Image 3 http://www.simpsonstrivia.com.ar/simpsons-photos/wallpapers/lou-simpsons-cop-wallpaper.jpg Image 4 http://www.linleyandkidsgroverufc.co.uk/150px-Snake_The_Simpsons.png Image 5 http://msp33.photobucket.com/albums/d87/xeasywayoutoix/The_Simpsons-Fat_Tony.png (All images were found by searching on google.co.uk, but I actually watched something and then used images to show my findings) News http://news.bbc.co.uk/1/hi/england/london/7735828.stm (News found on the BBC website searching for different types of crime cases) ?? ?? ?? ?? 1 ...read more.