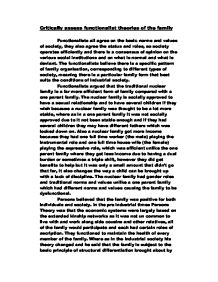 Functionalists all agree on the basic norms and values of society, they also agree the status and roles, so society operates efficiently and there is a consensus of opinion on the various social institutions and on what is normal and what is deviant. The functionalists believe there is a specific pattern of family organisation, corresponding to different types of society, meaning there is a particular family form that best suits the conditions of industrial society.

Functionalists argued that the traditional nuclear family is a far more efficient form of family compared with a one parent family. The nuclear family is socially approved to have a sexual relationship and to have several children if they wish because a nuclear family was thought to be a lot more stable, where as in a one parent family it was not socially approved due to it not been stable enough and if they had several children they may have different fathers which was looked down on. Also a nuclear family got more income because they had one full time worker (the male) playing the instrumental role and one full time house wife (the female) playing the expressive role, which was efficient unlike the one parent family where they got less income due to having a dual burden or sometimes a triple shift, however they did get benefits to help but it was only a small amount that didn’t go that far, it also changes the way a child can be brought up with a lack of discipline. The nuclear family had gender roles and traditional norms and values unlike a one parent family which had different norms and values causing the family to be dysfunctional.

Parsons believed that the family was positive for both individuals and society. In the pre industrial times Parsons Theory was that the economic systems were largely based on the extended kinship networks as it was not un common to live with and work along side cousins and other relatives, all of the family would participate and each had certain roles of ascription. They functioned to maintain the health of every member of the family. Where as in the Industrial society his theory changed and he said that the family is subject to the basic principle of structural differentiation brought about by industrialisation and that changes in the form of the family are adaptations to new conditions.

Although the Marxists have a structural perspective similar to the functionalists they disagreed with them and argued that the traditional nuclear family only benefited men and capitalist class and society. Marxists argued that the family is shaped by the economy. Another view is the feminist view and they believed that the functionalist view still benefited men a lot more than women. Feminists argued that females should be equal to men and that most societies are in deed sexist, also proving that men are dominant to women. They believed that women could also play the instrumental role as well as men, but even the working women were and still are subordinate.

Functionalists argued that the family is a universal, social, institution founded on biological attributes that gender roles within families are because of these attributes. The adults of a nuclear family were two leaders; the instrumental leader and the affective leader. They believed the family is viewed in evolutionary terms, which evolution occurs via differentiation.

The functionalist theories of the family is very different to the views on the 21st century where women now have some high jobs along with men, also some men stay at home to be the care giver. In most house holds men are no longer dominant and it is more equal, women also play part of the instrumental role. Even though equality between men and women is not one hundred percent, women now have a lot more rights and also do men, they can now have maternity leave from work and women can work above men.

After seeing the views of the functionalists and their theories I would say that they are out dated and sound like 1940’s America and this is why these views are not taken onto account by many people these days.