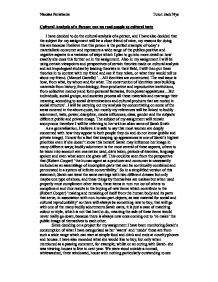 Cultural Analysis of a Person: can we read people as cultural texts

Cultural Analysis of a Person: can we read people as cultural texts I have decided to do the cultural analysis of a person, and I have also decided that the subject for my assignment will be a close friend of mine, my reasons for doing this are because I believe that this person is the perfect example of today's materialistic consumer and represents a wide range of the publics positive and negative aspects in a variation of ways which I plan to go into more detail on how exactly she does this further on in the assignment. Also in my assignment I will be using certain viewpoints and perspectives of certain theories made on cultural analysis and anthropological studies by leading theorists in their field, I will then put these theories in to context with my friend and see if they relate, or what they would tell us about my friend. (Manuel Castells) '...All identities are constructed. The real issue is how, from what, by whom and for what. The construction of identities uses building materials from history, from biology, from productive and reproductive institutions, from collective memory and form personal fantasies, from power apparatuses...But individuals, social groups, and societies process all these materials and rearrange their meaning, according to social determinations and cultural products that are rooted in social structure'. I will be carrying out my analysis by concentrating on some of the areas covered in the above quote, but mostly my references will be linked to bodily adornment, taste, power, discipline, media influences, class, gender and the subjects different public and private image. ...read more.

But in contradict to this point I believe that television has influenced most of Sarah's life and background, more so than the average person is influenced. I believe Sarah finds solace in the world behind the TV, how the TV programmes show her tragedies and drama, yet somehow everything ends up fine, a most common phrase of Sarah's 'it'll be reet' meaning 'it doesn't matter everything will turn out fine.' Also since coming to university her indulgence of the TV has increases more so, with nothing to do in between lectures and work, the flat mates watch TV to fill the gaps and are addicted to all the soaps, game shows, reality TV, sitcoms and the like. In each category there is many different programmes but all with the same message or hook being beamed out to their audiences e.g. Hollyoaks cliffhangers or Noel Edmonds tension building. Sarah knows this is all for her entertainment and there are slight exaggerations in TV obviously to make it interesting, but this means that if Sarah watches anything informative; like the news, or a conspiracy documentary, Sarah would be find it customary to take it on face value as a basic fact and be ignorant to the sometimes bias views of news readers or slight exaggerations of conspiracy theorists. (Dominic Strinati)'society has become subsumed within the mass media. It is no longer even a question of the media distorting reality, since this implies there is a reality, outside the surface simulations of the media, which can be distorted'. ...read more.

Sarah is very much like her mother in her 'laze faire' attitude to almost anything, and finds comfort in her father, an elegant, educated and pertinent figure in Sarah's life who she turns to in 'times of need'. But with Sarah going home every other week I believe she has not gained the independence which most university students seek and it is because of this that 'times of need' are as weekly as 'daddy, I am cooking an egg that's two days past its sell by date, is that ok?' I find most of these situations humorous, seeing as with a quick ask around the flat, or simply checking on the Internet would suffice for a good enough answer- instead of maybe interrupting her father's busy lifestyle. To conclude, after explaining to Sarah what it is exactly I saw her as in a specifically analytical model way, Sarah showed complete understanding and confirmed what I thought from the beginning, she obviously knows about being influenced and how most of the above is what affects her life, but she also knows that there is more to it than that, which o totally agree on. As I mentioned before it is impossible to categorise everyone into different styles, just because of what they wear, what class they come from, what experiences they have had and what actions they take- cultural, visual and social interpretations can not define everything, and try as we must we can not simplify people into type and class, but it will do as a simplified explanation, if we were exactly what we were analysed as, I do not believe I would be so close to most of my friends and family. ...read more.