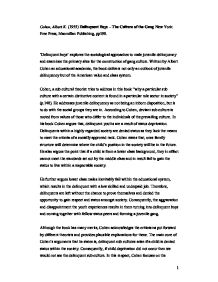 Delinquent Boys - The Culture of the Gang

Cohen, Albert K. (1955) Delinquent Boys - The Culture of the Gang New York: Free Press, Macmillan Publishing, pp198. 'Delinquent boys' explores the sociological approaches to male juvenile delinquency and examines the primary sites for the construction of gang culture. Written by Albert Cohen an educational academic, the book delivers not only an outlook of juvenile delinquency but of the American value and class system. Cohen, a sub cultural theorist tries to address in this book "why a particular sub culture with a certain distinctive content is found in a particular role sector in society" (p.148). He addresses juvenile delinquency as not being an inborn disposition, but is to do with the social groups they are in. According to Cohen, deviant sub culture is rooted from values of those who differ to the individuals of the prevailing culture. In his book Cohen argues that, delinquent youths are a result of status deprivation. ...read more.

However, this aspect is not disregarded in Cohen's book as he has emphasised that families are units in the class system, therefore the problems occurred within the family are primarily due to the society. Cohen's study was carried out in the United States where gangs are more common, however, is this the case for all cultures? British studies have provided support for Cohen's response to the formation of sub cultural gangs amongst the working class boys. David Hargreave (1967) carried out an observational study of working class boys in a secondary school and concluded that individuals who fail are more likely to become delinquents. In his book, Cohen does not see delinquency as an innate disposition or for one to contrive delinquency individually. He argues that one has to be part of a group where the pattern of delinquency is already established and where it is required and seen to be part of the norm within the group. ...read more.

Further, the theorists argue that to understand the delinquent subculture, historical data is required to make the theory testable, hence, his proposed ideas are not completely valid as the historical aspect is disregarded. Therefore, Cohen also needs to consider the full background of an individual before categorising them. Despite such criticisms, Delinquent Boys is a valuable text in which Cohen thoroughly explores the formation of gangs amongst working class boys. For those new to the sub culture theory, the book provides an easy understanding of the basis of juvenile crime. The book impresses that the working class dominate the American class system, but nevertheless the society has to mould itself to the criteria's set out by the middle class to prevent them from becoming delinquents. Cohen establishes why a families position in the class structure cannot be ignored as this is the primary root for the configuration of gangs. This study contributes much to the structure of gangs, but before labelling an individual there are many more aspects to be looked at, such as the entire background of a delinquent which could be further illuminated. ...read more.