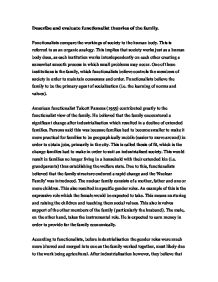 Describe and Evaluate Functionalists Theories of The Family

Describe and evaluate functionalist theories of the family.

Functionalists compare the workings of society to the human body. This is referred to as an organic analogy. This implies that society works just as a human body does, as each institution works interdependently on each other creating a somewhat smooth process in which small problems may occur. One of these institutions is the family, which functionalists believe controls the members of society in order to maintain consensus and order. Functionalists believe the family to be the primary agent of socialization (i.e. the learning of norms and values).

American functionalist Talcott Parsons (1955) contributed greatly to the functionalist view of the family. He believed that the family encountered a significant change after industrialisation which resulted in a decline of extended families. Parsons said this was because families had to become smaller to make it more practical for families to be geographically mobile (easier to move around) in order to obtain jobs, primarily in the city. This is called thesis of fit, which is the change families had to make in order to suit an industrialised society. This would result in families no longer living in a household with their extended kin (i.e. grandparents) thus establishing the welfare state. Due to this, functionalists believed that the family structure endured a rapid change and the ‘Nuclear Family’ was introduced. The nuclear family consists of a mother, father and one or more children. This also resulted in specific gender roles. An example of this is the expressive role which the female would be expected to take. This means nurturing and raising the children and teaching them social values. This also involves support of the other members of the family (particularly the husband). The male, on the other hand, takes the instrumental role. He is expected to earn money in order to provide for the family economically.

According to functionalists, before industrialisation the gender roles were much more blurred and merged into one as the family worked together, most likely due to the work being agricultural. After industrialisation however, they believe that the state took over many of the functions that the family might traditionally perform, such as education and healthcare. The production function of the family was rendered obsolete by the increase in factories. According to Parsons this left two irreducible functions of the family. These are primary socialization of children, which is the teaching of norms and values, and the stabilization of adult personalities. This is summed up by the ‘Warm Bath’ theory which is the support of the family towards to the adults (most likely the husband) to relieve the stress of the modern day living. Functionalists believe that socialization in the family is a one way process, the children who are being transmitted these messages, views and values. Parsons believed that achievement in modern society is limited to the nuclear family, therefore he promoted it as the 'ideal' family.

Despite functionalist views, it is widely thought that their beliefs on the family are heavily flawed. For example, Parsons view on the rapid change of family structure post industrialisation has often been criticised. Laslett (1972) argued that evidence showed that less than 10% of household’s pre-industrialisation contained extended kin. This therefore means that the family structure was already nuclear and Parsons may have exaggerated the change. Young and Wilmott (1957) also criticised Parsons view as they believe that he overstated the speed of change to the nuclear family. They believe the change was a gradual process. Young and Willmott also believe that there was mainly a decline in extended families in the 1960's due to families being moved into council houses and extensive slum clearence.

It has been argued that the nuclear family does not fit in with modern society. George Murdok (1949), an american, white, middle-class functionalist defined the family as two adults, one of each sex, in a socially accepted sexual relationship, with one or more children, own or adopted, of the sexually cohabiting adults. This is often said to not be relevant to modern society, as the definition does not fit the majority of different family types around the world. Murdock claimed that the nuclear family is so useful to society that it is inevitable and universal.  However, he is often criticised for this view as most family types in society do not fit his definition. Also, when Murdock was thinking about the family, he focused on middle-class, white americans, therefore it is unlikely to suit families who are working class, or live in different countries. This shows that they do not consider the diversity of family structures as there are many variations based upon region, class, religion, etc.

I believe the functionalist view on the family is dated as it fails to 'fit' in modern society. There is a lack of acknowlegement on the working class and other ethnic groups, as Murdock was describing a white, middle-class, american family which simply cannot be compared to a black, working class family living in the UK. Nor it can it be compared to the ik or co-housing, and various other family structures around the world, thus it is not relevant to the world today. The nuclear family cannot help but be criticised, as it displays many flaws which makes it less applicable to modern society. For example, the male (husband) is supposed to take the instrumental role, which many females now take as they are now going to work. This also can be switched around, as although not as common, males do take the expressive role in a family. The given female role can be found as sexist, as it implies that they cannot look after themselves as they are not able to go to work and earn money. In conclusion, Murdocks view of the family may have fit an american middle class society in the 1940's/1950's, but it simply does not fit in society today.