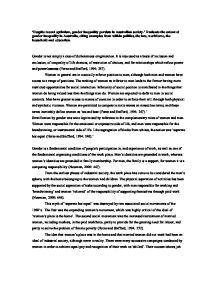 'Despite recent optimism, gender inequality persists in Australian society.' Evaluate the extent of gender inequality in Australia, citing examples from within politics, the law, workforce, the household and education. Gender is not simply a case of dichotomous oraginisation. It is also used as a basis of inclusion and exclusion, of inequality of life chances, of restriction of choices, and for relationships which reflect power and powerlessness (Furze and Stafford, 1994: 247). Women in general are in a socially inferior position to men, although both men and women have access to a range of positions. The ranking of women as inferior to men leads to the former having more restricted opportunities for social interaction. Inferiority of social position is manifested in the things that women do being valued less than the things men do. Women are expected to defer to men in social contexts. Men have greater access to means of coercion in order to enforce their will through both physical and symbolic violence. Women are permitted to compete in male arenas on masculine terms, and these terms inevitably define women as 'second best (Furze and Stafford, 1994: 247).' Stratification by gender was once legitimised by reference to the complementary roles of women and men. Women were responsible for the emotional or expressive side of life, and men were responsible for the breadwinning, or instrumental side of life. ...read more.

In Australia, as in other industrial countries, the workforce was highly segregated by sex, with women being concentrated in the 'female' areas of clerical sales and service work, and men dominating in administration, politics, trades, transport, technical, and primary industry work (Newman, 2000: 462). Recent analyses indicate that the lines between men's and women's work are blurred. While women are found in a much wider range of occupations then before, and men are found in the upper rankings of women's work, the majority of work is still gender typed (Newman, 2000:463). The education system is a major focus for attempting to change gender patterns. However, in the past the curriculum was based at least partly on the expectation that girls and boys would grow up to different adult roles; the curriculum reflected this. Boys were taught the skills that would take them into a career of some kind, and most girls were taught domestic skills (Spencer, 1979: 403). Equal opportunity for girls in schools has been on the educational policy agenda since the publication in 1975 of the Schools Commission Report. The report drew attention to the ways in which the existing system disadvantaged girls, resulting in a waste of skill and talent for society, as well as frustration for individuals. ...read more.

Another area in which gender has had an impact on the law, with the legal system being involved in regulating gender relations, is the manifestation of patriarchal power in domestic violence and sexual assault. The incidence of these types of crimes is difficult to establish because, until recently, both have been considered 'private' relationships (Bilton and Bonnett, 1984: 132). Masculine aggression has been socially approved, provided it is channeled through sport and war, where it is directed towards other men. Changes in women towards greater independence and assertiveness have been met by men with some confusion and uncertainty. The protective response is no longer considered appropriate, but new forms of mutual respect are still being negotiated. Older explanations of gender inequality drew on the concept of 'natural difference.' Masculinity and femininity were seen as naturally and desirably different and complementary. Boys and men were supposed to be 'naturally' more ambitious and aggressive, with protective instincts. Girls and women were 'naturally' more deferential, more concerned with being pleasant and attractive. These qualities were seen as desirable, if not innate. It is now more acceptable for western women to have careers as well as children, and to be ambitious and compete with men on masculine terms. However, for most women this is still not possible. ...read more.