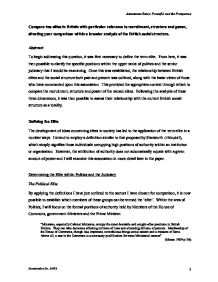 Determining the Elite within Politics and the Judiciary.

Compare two elites in Britain with particular reference to recruitment, structure and power, situating your comparison within a broader analysis of the British social structure. Abstract To begin addressing this question, it was first necessary to define the term elite. From here, it was then possible to clarify the specific positions within the upper ranks of politics and the senior judiciary that I would be examining. Once this was established, the relationship between British elites and the social structure both past and present was outlined, along with the basic views of those who have commented upon this association. This provided the appropriate context through which to compare the recruitment, structure and power of the named elites. Following the analysis of these three dimensions, it was then possible to assess their relationship with the current British social structure as a totality. Defining the Elite The development of ideas concerning elites in society has led to the application of the term elite in a number ways. I intend to employ a definition similar to that proposed by Stanworth (1984 p247), which simply signifies those individuals occupying high positions of authority within an institution or organisation. However, the attribution of authority does not automatically equate with a given amount of power and I will examine this association in more detail later in the paper. Determining the Elite within Politics and the Judiciary The Political Elite By applying the definitions I have just outlined to the sectors I have chosen for comparison, it is now possible to establish which members of these groups can be termed the 'elite'. Within the area of Politics, I will focus on the formal positions of authority held by Members of the House of Commons, government Ministers and the Prime Minister. "Ministers, especially Cabinet Ministers, occupy the most desirable and sought-after positions in British Politics. They can take decisions affecting millions of lives and allocating billions of pounds. ...read more.

A number of private clubs centred mainly in London facilitated direct ties of association, friendship and kinship. Furthermore, it was very common for individuals to hold more than one kind of elite position; for instance, it was perfectly possible to combine a successful career at the top of business and at the top of politics. This trend continued well into the twentieth-century; even in the 1970s approximately two-thirds of Conservative MPs were directors or equivalent in some kind of business enterprise (Roth in Stanworth 1984 p267). Another interconnection particularly relevant to this paper were the number of High Court judges whom formerly sat as MPs. "H.J. Laski recorded that between 1832 and 1906, out of 139 judges appointed 80 were Members of the House of Commons at the time of their nomination and 11 others had been candidates for Parliament: that of the 80, 63 were appointed by their own party while in office; and 33 of them had been either Attorney-General or Solicitor General" (Griffith 1991 p25) Although this channel of entry is much less common than was once the case, this linkage was especially controversial as the appointment of judges lies solely in the hands of politicians. The Prime Minister appoints High Court and circuit judges and magistrates after consultation with the Lord Chancellor. Almost all High Court judges are appointed from the ranks of QCs (Queen's Counsel), who are senior barristers (the Lord Chancellor decides which barristers are to become QCs). By 1990, Margaret Thatcher had appointed all the lord justices of appeal and all but one of the law lords when she was Prime Minister (Budge et al 2001 p490). However, it is now unlikely to base the appointment of senior judges on their political allegiance to the controlling party of the day. "Since Lord Haldane was Lord Chancellor (1912 -15) appointments are believed to have been based on legal and professional qualities rather than political affiliation, as was the case in earlier years. ...read more.

The political elite was slightly more open, though recently it had become dominated by the middle classes. In terms of their structure and integration, there was an evident decline in the general elite culture that had prevailed at the beginning of the twentieth century. Nevertheless, there was still a clear correlation between the social make-up of both elites and the interests they favoured in their actions. The final section explored the validity of this correlation in more detail and assessed the influence of other forces upon their behaviour. This revealed that the political elite was being placed under a great deal of pressure to prioritise the interests associated with the upper and middle classes. On the other hand, the senior judiciary experienced much greater autonomy, possibly because their own personal culture intrinsically favours these groups anyway. Therefore, across each dimension of the political and judicial elites' composition, privileged groups within the social structure still appear to dominate. This creates the impression of a strong cycle of inheritance via education, maintenance via institutional values and influence on the execution of power that is very difficult for those without similar education, values or financial power to break. Furthermore, the exclusive access that certain groups have to elite membership and their ability to maintain a system that protects their existing interests is a core aspect of how we define privilege itself. Such a definition incorporates the discrimination experienced by many women and ethnic minority groups, as well as those within the working class. Indeed, I would have liked to explore the disparities of gender and race in more detail, however the information available concerning these groups in relation to elite positions was somewhat limited. In Britain today, the only real prospect of severing this structural bias is greater European integration and the consequent adoption of fairer financial and social policy. However, the likelihood of changes so unfavourable to the current dominant interests being accepted into our system is somewhat questionable. Assessment Essay: Powerful and the Prosperous 1 Examination No. 34583 ...read more.