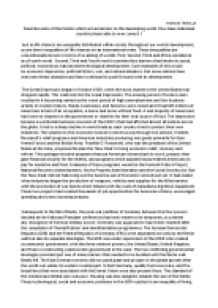 ﻿THOMAS TREVILLA Describe some of the factors which act as barriers to the developing world. How have individual countries been able to over come it ? Just as life chances are unequally distributed within society throughout our worlds development, so are there inequalities of life chances on an international order. These inequalities are conventionally known in terms of a ranking of worlds. First, Second, Third and Africa considered as a Fourth world. Second, Third and Fourth world countries face barriers that hinder its social, political, economical, natural and technological development. Such examples of this would be economic depression, political factors, war, and natural disasters. But some nations have overcome these obstacles and have continued to push forward with its development. The Great Depression began in October 1929, when the stock market in the United States had dropped rapidly. This crash led into the Great Depression. The ensuing period of twelve years resulted in it becoming ranked as the worst period of high unemployment and low business activity in modern history. Banks, businesses, and factories were closed and it had left millions of Americans in lack of an occupation, a home and some without food. ...read more.

It took almost forty-five years in 1989, till the Berlin wall had finally fallen. The motivation was not purely political or even pursued solely by the political leaders. The fall of the wall was caused by ?A truly peaceful and popular revolt? by the people of Germany. The politicians had the final say, but it was the people who initiated the action and pushed over the first domino that led to the reunification of Germany. And in September, 1990, the United States, Great Britain, France, and the Soviet Union signed a treaty with the East and West German governments relinquishing all the occupation rights they had acquired under the terms of Germany's surrender at the end of World War II. On October 3, 1990, after more than 40 years of division, Germany was finally reunited as one nation. As long as there have been civilizations, there have been wars. Whether it is justified or not it is evident that there has always been repercussions on the environment and the people. Signs of devastation is evident, lives are lost and money is diverted from the development of the country. ...read more.

These households did not go under water so this food remained available to the families living here.? Food shelters were also constructed (the size of 18 to 35 football pitches) and it could accommodate 100 to 300 families . Villagers brought their livestock and possessions, to the safety of this flood shelter in case of emergency. Disaster preparedness committees were created and Oxfam also provided radios and rescue boats. Committee members had testified, and had stated : ?Previously we just reacted. We?d work together, but now we plan before the flood happens. It?s meant that, for example, we didn?t have to leave here in 2004.? In conclusion, economic depression, political factors, war, and natural disasters have served as barriers that have hindered a nations development. But countries have formulated several successful schemes that have overcome these obstacles; it may be creating new community projects to better the countries social and economical systems or seeking assistance from foreign powers. And in other examples, these schemes had been the very push that accelerated its growth to a state of full development. Prosperity and growth can only be achieved when all parties unite and come together as one, Henry Ford had once said : ?Coming together is a beginning; keeping together is progress; working together is success. ...read more.