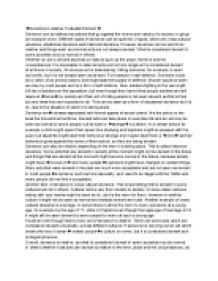 Deviance is relative. Evaluate this term

?Deviance is relative. Evaluate this term? Deviance can be defined as actions that go against the norms and values of a society or group an example crime. Different types of deviance can be split into 3 types, which are cross cultural deviance, situational deviance and historical deviance. However deviance can be said to be relative and things such as criminal acts are not always deviant. What is considered deviant in some societies may be normal in others. Whether an act is deviant depends on factors such as the place, the time and the circumstances. It is impossible to label all acts and not one single act is considered deviant at all times in society. ...read more.

Deviant acts can take place in everyday life and an act may be seen as normal by some people, but deviant or ?strange? by others. In a certain school for example a child might spend their spare time studying and teachers might be pleased with the pupil, but students might label their behaviour strange and maybe label them a ?nerd? as their behaviour goes against the norms of their school, so they are being deviant. Deviance can also be relative depending on the time it is taking place. This is called historical deviance. Some acts that are deviant in society at the moment might not be deviant in the future and things that are deviant at the moment might become normal in the future, because society might have ?moved on? and many people?s opinions might have changed on certain things. ...read more.

In some tribes it will be the norm to marry someone at a young age, for example by the age of 17, while in England even though the legal age of marriage is 16, it might still be seen deviant by some people to marry at such a young age. However even though nearly every act of deviance is relative. There are some acts which are considered deviant universally, across different cultures. If someone is carrying out an act which breaks the law, it doesn?t matter people?s culture or norms, but it is considered deviant as it is illegal behaviour. Overall, deviance is relative, as what is considered deviant in some societies may be normal in others whether most acts are deviant is relative to the time, place and the circumstances, as although many cultures might have similar norms and values, norms and values will vary from society to society. ...read more.

A good piece of work explaining why deviance is relative. Excellent examples are given to support the points being made and the 3 types of deviance. Just be mindful that certain acts may be ?understandable? rather than deemed ?ok? by most people. Proof-read carefully to eliminate grammatical errors. Having said that the writing style is good overall.
4/5