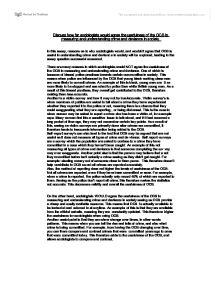 Discuss how far sociologists would agree the usefulness of the OCS in measuring and understanding crime and deviance in society.

Discuss how far sociologists would agree the usefulness of the OCS in measuring and understanding crime and deviance in society.

In this essay, reasons as to why sociologists would, and wouldn’t agree that OCS is useful in understanding crime and deviance in society will be explored, leading to the essay question successful answered.

There are many reasons in which sociologists would NOT agree the usefulness of the OCS in measuring and understanding crime and deviance. One of which is because of biased police practises towards certain communities in society. This means when police are influenced by the OCS that young black working class men are more likely to commit crimes. An example of this is black, young men are 9 xs more likely to be stopped and searched by police than white British young men. As a result of this biased practises, they overall get contributed to the OCS, therefore making them less accurate.

Another is a victim survey and how it may not be true/accurate. Victim survey’s is when members of publics are asked to tell about a crime they have experienced whether they reported it to the police or not, meaning there is a chance that they could exaggerating what they are reporting, or being dishonest. This is the case in when women may be asked to report a crime she has been a victim of, for example rape. Many women find this a sensitive issue to talk about, and if it had occurred a long period of time ago, they may not remember certain key points. As a result of this, seeing as victim surveys are primarily done after crimes are committed, it therefore leads to inaccurate information being added to the OCS.

Self-report survey’s can also lead to the fact that OCS may be argued that are not useful as it does not measure all types of crime and deviance.  Self report-surveys are a survey which the population are asked to confess to a crime they have committed in a case which they haven’t been caught. An example of this not measuring all types of crime and deviance is that someone completing the survey may over exaggerate. Another point also is that the person may believe that a act they committed before isn’t actually a crime seeing as they didn’t get caught. For example: stealing money out of someone close to them purse. This therefore doesn’t help contribute to OCS as not all crimes are reported accurately.

Also, the method of reporting does not higher the levels of usefulness of the OCS. Not all crimes are reported, even if they have been committed or seen. For example, when a crime is reported, the police actually only record 40% of which are reported to them. Seeing as the police don’t report all crime, this therefore makes the statistics not accurate. This decreases validity and overall the usefulness of OCS.

On the other hand, sociologists WOULD agree the usefulness of the OCS in measuring and understanding crime and deviance in society seeing as OCS provide a cheap and easily available resource. This means that OCS is actually available to be looked at and referred to at anytime. An example of this is that they are available from the official website, meaning they are constantly updated. This therefore higher the usefulness for sociologists when using OCS.

Another useful point is that they can show change over times, in other words patterns. This means when you can tell the rise and falls of crime, and also what crime is being committed. For example, from having the OCS changing over time, you can there compare and contrast crimes that were committed years ago to ones that were committed today. This therefore adds to the usefulness of the OCS, and allows sociologists to compare and contrast.

Also, studies which contribute to the OCS (self-report surveys, victim surveys etc.) are all cheap. All they involve are paper which therefore doesn’t cost an incredible amount of money. This information is also pre-analysed, making the validity of the statistics considerably high and results in being useful for sociologists.

Overall, it is clear that sociologists would not agree the usefulness of the OCS in measuring and understanding crime and deviance in society. This is because due to self-report survey, reporting, victim surveys, it is clear that the main disadvantage of all of these is that they all lead to inaccurate results which therefore contribute the OCS. This makes the validity of the statistics decrease, and therefore not become useful to sociologists.