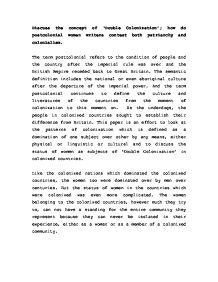 Discuss the concept of 'Double Colonization'; how do postcolonial women writers contest both patriarchy and colonialism.

Discuss the concept of 'Double Colonization'; how do postcolonial women writers contest both patriarchy and colonialism. The term postcolonial refers to the condition of people and the country after the imperial rule was over and the British Empire receded back to Great Britain. The semantic definition includes the national or even aboriginal culture after the departure of the imperial power. And the term postcolonial continues to define the culture and literatures of the countries from the moment of colonization to this moment on. As the underdogs, the people in colonized countries sought to establish their difference from Britain. This paper is an effort to look at the patterns of colonization which is defined as a domination of one subject over other by any means, either physical or linguistic or cultural and to discuss the status of women as subjects of 'Double Colonization' in colonized countries. Like the colonized nations which dominated the colonized countries, the women too were dominated over by men over centuries. But the status of women in the countries which were colonized was even more complicated. The women belonging to the colonized countries, however much they try to, can not have a standing for the entire community they represent because they can never be isolated in their experience, either as a woman or as a member of a colonized community. It is very difficult to study and analyze women's writing without a basic study of feminist movements and the history of feminism. Gynocentricism in the history of feminism; is a very big term in understanding women's texts and women's writing. This term has been coined by an eminent Feminist theorist, Elaine Showalter, to describe the last phase in the Feminist movement. This is an area of study, which centered around women and concentrated its focus in finding out more about women and women writers. They harp on the fact that both men and women write very differently. ...read more.

Women's writings have always argued that men had conspired to keep them away from some precious resource by positing a basic difference in the matters of intellect. There is a pervasive feeling of something that they have lost, something that had been cruelly withheld from them, some inflicted wound that only formal knowledge can heal. Devi lived in the 19th century India where a lot of changes were taking place. It was the time of colonial rule and India was a dominated colonized country then. In ancient India women were considered to be the weaker sex which was supposed to be dominated over by men and used as objects for the selfish purposes by the stronger sex. Women had none or very little say in almost all the walks of life. To look at it this way, women were doubly marginalized and doubly colonized then, once by the males who ruled them, and secondly by the British who were the colonizers in India. Women in ancient India had little or no rights regarding almost anything in society. They were looked upon as caste or class objects. In those days women neither inherited their father's nor their husband's property. Without this right, women felt inhibitive about claiming their identity that caste, class, lineage offers to men. They remained incomplete caste and class subjects. Their money was a reduced to 'Stridhan' or bridal gifts which they received during marriage. They were people without incomes, more dependant economically then any other way. Within the family they were provided service and deference and were engaged in very heavy daily labour at home. This allocated a woman to perhaps the worst exploited social categories of that order. Jyotirao Phule, the 19th century reformer, had bracketed the Brahmin women along with 'shudras' (or extremely low caste/status) as the victim of Brahminical domination. Her oppression was thus double. On one hand, they had very little money of their own. ...read more.

She is both a 'woman' who is the weaker sex, and she is the 'oppressed' who is the weaker subject in the eyes of the colonizing government. As a woman she had to be angelic and stay at home, be either a housewife, a doting daughter, sister and mother to the men of the household. She had to look after the other members of the family and do the household chores and manage the household. She had to suffer the domination by each and every member of the family and outside. On the other hand if she belonged to a country which was under the colonial rule, she is oppressed by the ruling country. She is always lower in the hierarchy and she is always placed after the colonizers. She is denied privileges like education and work and is given no right to speak her mind in the society. So not only does she get oppressed by her male counterparts at home, she gets denied any status by the colonizers. In countries like India which have social systems consisting of class and caste distinctions, the situation becomes even more complex. Women belonging to subcastes or lower castes are even lower down the social status because they then are marginalized not only by men and the colonizers but also by the upper class women who have more social rights than they do. In the first case the men are the patriarchy and in the second it's the colonizers who are the dominating class. A woman is ...simple, unchanging unity, always confronting the same kind of monolithic patriarchal oppression (Moi:147) Patriarchy here is a univocal, non-contradictory force that prevents women from expressing their real nature. And that here stands both for men and the colonizers. Thus my argument that women writers in a colonized world are doubly marginalized and doubly colonized and they have to find their way out of a maze of multiple dominations which makes their survival and their success even more important and celebratory. ...read more.