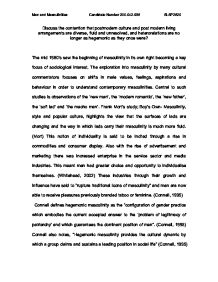 Discuss the contention that postmodern culture and post modern living arrangements are diverse, fluid and unresolved, and heterorelations are no longer as hegemonic as they once were?

Discuss the contention that postmodern culture and post modern living arrangements are diverse, fluid and unresolved, and heterorelations are no longer as hegemonic as they once were? The mid 1980's saw the beginning of masculinity in its own right becoming a key focus of sociological interest. The exploration into masculinity by many cultural commentators focuses on shifts in male values, feelings, aspirations and behaviour in order to understand contemporary masculinities. Central to such studies is observations of the 'new man', the 'modern romantic', the 'new father', the 'soft lad' and 'the macho man'. Frank Mort's study; Boy's Own- Masculinity, style and popular culture, highlights the view that the surfaces of lads are changing and the way in which lads carry their masculinity is much more fluid. (Mort) This notion of individuality is said to be incited through a rise in commodities and consumer display. Also with the rise of advertisement and marketing there was increased enterprise in the service sector and media industries. This meant men had greater choice and opportunity to individualise themselves. (Whitehead, 2002) These industries through their growth and influence have said to "rupture traditional icons of masculinity" and men are now able to receive pleasures previously branded taboo or feminine. (Connell, 1995) Connell defines hegemonic masculinity as the "configuration of gender practice which embodies the current accepted answer to the 'problem of legitimacy of patriarchy' and which guarantees the dominant position of men". (Connell, 1995) Connell also notes, "Hegemonic masculinity provides the cultural dynamic by which a group claims and sustains a leading position in social life" (Connell, 1995) Connell's critique of hegemonic masculinity sees men as "entrenched in the defence of patriarchy" but also finds reasons why men to want to change the system. (Connell, 1995) Connell recognises that not all men are the same or have the same aspirations; he refers to them as "effeminate or unassertive heterosexuals" (Connell, 1995) ...read more.

This they argue is a valid point when thinking about the overwhelming whiteness of depictions of the new forms of man (Frosh et al, 2000; 2001).Their study based in London secondary schools they found that "black young men of African Caribbean descent are viewed as 'super masculine', embodying highly valued traits associated with toughness, a particular masculine style and dress, and physical ability." (Frosh et al, 2000; 2001) This stereotyped them "popular/hegemonic figures"(Frosh et al, 2000;2001) Majors and Billson studies in 1994, highlighted how such a type cast could actually project these lads negatively and give them little cultural capital in wider society. (Majors and Billson in Connell,1995) "It had major costs in terms of being trapped by the 'cool pose', with little cultural capital in wider society." (Majors and Billson in Connell, 1995) "In fact the very traits that were admired were also liable to produce fear and discrimination from authority figures such as teachers and potential employers". (Majors and Billson in Connell, 1995) Studies in Popular culture shows, fixed identities do not portray a real circumstance to which the Modern man lives, "Anybody working on popular culture knows how awkwardly notions of fixed identity sit with the fluidity of sexual images represented in fashion, music and nightlife". (Mort) There is "need for a different set of languages to speak about masculinity- languages which grasp masculinity as a process rather than static and unchanging" (Mort) Heterorelations are open to great diversification in Post modern culture's overall examination of the male figure. Diversity is increasingly shown as men's need for individuality and discovery for inner fulfilment. Also, an increase in men's involvement in consumer culture has been attributed to a fascination by the media over male creation and its portrayal of the 'Ideal man'. Statistics show living arrangements can no longer be typified by the traditional and static breadwinner role model as various living arrangements are constructed by many social factors such as decline in marriage rate, increased divorce rates and increasing number head of households being single parents. ...read more.

In fact the very traits that were admired, were also liable to produce fear and discrimination from authority figures such as teachers and potential employers. Tim Edwards' assertion that the new man was not simply the product of the media or even of responses to second wave feminism, but 'he was rather the crystallisation of consequences in economics, marketing, political ideology, demographics and most widely consumer society in the 1980s' (1997). This, I think, gives a very valuable sense of the multiplicity of different influences and determinations that produced the discourses about the new man and (equally) the new lad The style press exercised two key kinds of influence, then - first in opening up space for fashion/lifestyle magazines aimed at men, and secondly in pioneering radically new ways of representing male bodies. As with feminism it is hard to overestimate the impact of the gay liberation movement - post Stonewall - on the construction of the figure of the 'new man'. One avenue for this influence has been on visual representations of the male body in popular culture. Magazines aimed at gay men, together with pin-ups and particular subcultural styles within the gay club scene have had a profound effect upon representations of masculinity, through a routing that has gone from gay porn through art house photography to advertising (Parsi: 1997). We have become a culture preoccupied with interpreting itself - discovering or producing meaning in anything and everything. Legions of professionals now exist whose role it is to pick over and analyse every aspect of human behaviour from the bedroom to the street, to find or create a pattern in what they see, and to narrate the story of who we are back to us in compelling new terms. The new cultural intermediaries (of whom academics constitute one group) have been crucial to the emergence and persistence of discourses http://www.lse.ac.uk/collections/genderInstitute/pdf/powerAndProduction.pdf Power and the Production of Subjects: a Genealogy of the New Man and the New Lad Rosalind Gill, Gender Institute, London School of Economics ?? ?? ?? ?? Men and Masculinities Candidate Number 200-042-936 SLSP2820 ...read more.