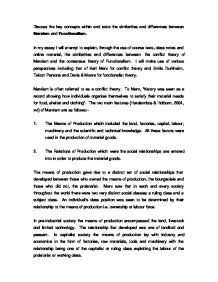 Discuss the key concepts within and state the similarities and differences between Marxism and Functionalism.

Discuss the key concepts within and state the similarities and differences between Marxism and Functionalism. In my essay I will attempt to explain, through the use of course texts, class notes and online material, the similarities and differences between the conflict theory of Marxism and the consensus theory of Functionalism. I will make use of various perspectives including that of Karl Marx for conflict theory and Emile Durkheim, Talcott Parsons and Davis & Moore for functionalist theory. Marxism is often referred to as a conflict theory. To Marx, "history was seen as a record showing how individuals organise themselves to satisfy their material needs for food, shelter and clothing". The two main features (Haralambos & Holborn, 2004, xvi) of Marxism are as follows:- 1. The Means of Production which included the land, factories, capital, labour, machinery and the scientific and technical knowledge. All these factors were used in the production of material goods. 2. The Relations of Production which were the social relationships one entered into in order to produce the material goods. The means of production gave rise to a distinct set of social relationships that developed between those who owned the means of production, the bourgeoisie and those who did not, the proletariat. ...read more.

Talcott Parsons refined Durkheim's theory further and argued (Haralambos & Holborn, op cit, 940) that society could be analysed in terms of four basic functional needs that society had to meet in order for it to function. These were known as functional prerequisites:- Adaptation (Lawson & Garrod, 2003, 3) - how societies adapt to and shape their environment to meet their own needs for example, food and shelter has to be provided in order to meet the physical needs of its members. Goal Attainment (Lawson & Garrod, op cit, 114) - this is the need for all societies to set goals in order to direct social activity. The institution of the government sets goals and allocates resources for their achievement. Integration (Lawson & Garrod, op cit, 138) - This is the adjustment made in the social system for conflict. The legal system is the institution assigned to meet this need and the law standardises relationships between individuals to reduce the potential for conflict. Should conflict arise the courts will deal with it. Pattern Maintenance (Lawson & Garrod, op cit, 150) - this is the maintenance of the basic pattern of values within society. ...read more.

They see human activity as a product of social structure and both place great emphasis on society being an external structure containing the individual. Although Marxist theory is one of class conflict within a capitalist society, it to be replaced by a more equal communist society and we can see that in this respect it is not that far removed from the functionalist approach of harmony and resolution. Whilst it can be seen that there is indeed a divide between the perspectives in relation to the separate institutions within society, it is fair to say that all societies throughout history have a degree of consensus over values and at some point have had their fair share of conflict. Whether they are relevant to today's society as separate perspectives remains to be seen and they are indeed best applied depending on the standpoint of the individual, in that elements of them are relevant whilst others are not. In the words of Anthony Giddens "societies can no longer be understood through the application of general theories". If society is to be studied then it should be from a wide range of theories and approaches rather than just from the structuralist point of view. ...read more.