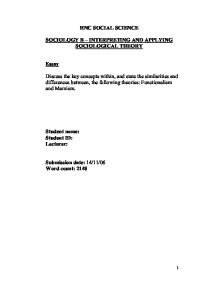 Discuss the key concepts within, and state the similarities and differences between, the following theories: Functionalism and Marxism.

HNC SOCIAL SCIENCE SOCIOLOGY B - INTERPRETING AND APPLYING SOCIOLOGICAL THEORY Essay Discuss the key concepts within, and state the similarities and differences between, the following theories: Functionalism and Marxism. Student name: Student ID: Lecturer: Submission date: 14/11/06 Word count: 2148 Within sociology there are a number of varying theories and theorists interested in explaining and understanding the social world. This can be achieved through 'the sociological imagination' a term coined by C. Wright Mills in 1959. He believed that 'the sociological imagination enables us to grasp history and biography and the relations between the two within society. That is its task and its promise' (1959 C. Wright Mills) Functionalism is one such theory. It first appeared in 19th century Europe and was largely influenced in its early stages by French sociologist Emile Durkheim and later developed by American sociologists such as Talcott Parsons and Robert Merton. The theory was most influential during the 1940's and 50's but declined in popularity during the 60's. However many functionalist ideas have survived in the guise of New Right thinking which was closely related to British and American policy making particularly during the 1980's. Functionalism may be regarded as a macro theory, this means that a functionalist will look at a society as a whole and investigate the relationships formed between its various parts or ...read more.

Other aspects of society such as the family, political, educational and legal systems make up the superstructure which is largely shaped by the infrastructure. Therefore a change in the economy will result in a corresponding change in the superstructure. [Haralambos & Holborn 6th ed.] Throughout his argument, Marx maintained that a basic conflict and contradiction, in the form of exploitation of one social group by another, has existed in a continuously evolving form in all historical societies. [Haralambos & Holborn 6th ed.] For example, in feudal societies lords exploited their serfs and similarly in capitalist societies today employers exploit their employees. However, Marx believed that the major contradictions in society exist between the forces of production and the relationships of production. [Haralambos & Holborn 6th ed.] This is best illustrated in terms of the infrastructure of capitalist industrial society. Marx argued that wealth in capitalist societies is produced by the labour power of the workers. However the bulk of this wealth is appropriated in the form of profits by the capitalists who own the means of production. The wages which are paid by the capitalists in return for labour fall well below the value of wealth they produce. Similarly Marx identifies a contradiction between the organisation of labour and the nature of ownership. ...read more.

Marxist theorists are more interested in explaining society in terms of causes and development, for this reason Marxism is seen to be more dynamic. Functionalism also argues that there is a value consensus which holds institutions and society together, in other words they believe a general agreement exists in society about which things are important and how things should be done. Marxists disagree with this analysis and argue that values are often imposed by powerful groups in society. In terms of social life, functionalists believe norms and values to be the basic elements and suggest a dependence on commitments and solidarity for the maintenance of social life. Marxists would argue that interests are the basic elements of social life, which involves inducements and coercion and generates opposition, exclusion and hostility. Finally, functionalism tends to view social systems as persistent and regard the class system and capitalism to be vital whereas Marxism as a more dynamic theory can see the potential for change as well as being highly critical of both the class stratification system and capitalism. In conclusion there are a number of theories interested in explaining and interpreting social life, Marxism and functionalism are just two of these theories. Others include feminism, the new right, new left realism, weberian theory, and symbolic interactionism, to name but a few. Each theory is individual in its own right however there are a number of similarities, for example between functionalism and the new right. ...read more.