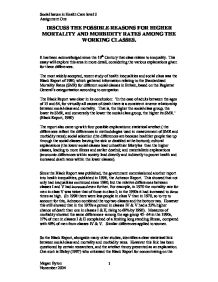 Discuss the possible reasons for higher mortality and morbidity rates among the working classes.

DISCUSS THE POSSIBLE REASONS FOR HIGHER MORTALITY AND MORBIDITY RATES AMONG THE WORKING CLASSES. It has been acknowledged since the 19th Century that class relates to inequality. This essay will explore this area in more detail, considering the various explanations given for these differences. The most widely accepted, recent study of health inequalities and social class was the Black Report of 1980, which gathered information relating to the Standardised Mortality Rates (SMR) for different social classes in Britain, based on the Registrar General's categorization according to occupation The Black Report was clear in its conclusion: 'In the case of adults between the ages of 15 and 64, for virtually all causes of death there is a consistent inverse relationship between social class and mortality. That is, the higher the social class group, the lower its SMR, and conversely the lower the social class group, the higher its SMR.' (Black Report, 1980) The report also came up with four possible explanations: statistical artefact ( the differences reflect the differences in methodologies used in measurement of SMR and morbidity rates); social selection (the differences are because healthier people rise up through the social classes leaving the sick or disabled at the bottom); cultural explanations (the lower social classes lead unhealthier lifestyles than the higher classes, leading to more illness and ...read more.

Other researchers have argued that the opposite is in fact true, however: that those from poorer backgrounds face a wealth of economic, social and employment factors that contribute to ill health. Therefore they say that class position shapes health, and not vice versa. The third explanation is that of culture, and says that the lower classes engage in more unhealthy lifestyles: smoking, eating more fatty and sugary foods, and drinking more. All lead to higher morbidity levels and earlier deaths (HMSO, 1999). Blame for these statistics is therefore laid firmly at the individual's door, or with the social environment in which they live, and educational programmes are advocated. However critics argue that these behaviours are a rational response to the circumstances in which people live. For example, Graham & Blackburn (1993) found that mothers on Income Support smoke because they have lower 'psycho-social' health than the general population, and smoking provides a very real form of relief for them. It may be the only thing that they do for themselves in a day filled with childcare responsibilities, and may also be an economic necessity, in that the nicotine abates hunger so that food is not as necessary. A further explanation given for the class inequalities in health is the materialistic explanation, which traces the main influences on health to the structures of society and conditions of life for its members. ...read more.

hernias, gallstones, when compared with the amount of consultations made by patients (Chaturvedi & Ben-Shlomo, 1995) and often once a referral has been made a patient from a deprived area will be given lower priority and therefore wait longer for surgery than one from a better-off area (Pell et al, 2000). In conclusion, it has been shown that vast inequalities in health status, and also in health care provision, exist between the social classes, even in modern Britain, despite the popular conception of a 'classless society'. Despite improvements in medical knowledge, nutrition, housing, sanitation, employment conditions and the health services, people of a lower social class are still more likely to die before they reach one year of age, and, if they reach that milestone, are three times more likely to die before the age of 64 than somebody in a higher social class. Various explanations for these facts have been put forward, and criticised, but the theory that seems to have most support from the research available is that of the materialists. This links with the social model of health, which is gradually becoming more widely accepted. It will take huge effort on behalf of a government to reduce, and eventually eradicate, the inequalities in health experienced by those in the lowest social classes within Britain today, but that is not to say it is impossible given consistent and committed effort. ...read more.