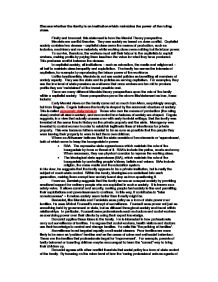 Discuss whether the family is an institution which maintains the power of the ruling class.

Discuss whether the family is an institution which maintains the power of the ruling class. Firstly and foremost: this statement is from the Marxist Theory perspective. Marxists are conflict theories. They see society as based on class conflict. Capitalist society contains two classes - capitalist class owns the means of production, such as factories, machinery and raw materials, while working class owns nothing but its labour power. To survive, therefore, the workers must sell their labour to the capitalists to exploit workers, making profits by paying them less than the value for what they have produced. This produces conflict between the classes. In capitalist society, all institutions - such as education, the media and religion ect - all half to maintain class inequality and exploitation. The family too serves the interests of capitalism, for example by reproducing the labour power of the workforce. Unlike functionalists, Marxists do not see social policies as benefiting all members of society equally. They see the state and its policies as serving capitalism. For examples, they see the low level of state pensions as evidence that once workers are too old to produce profits they are 'maintained' at the lowest possible cost. There are many different Marxists theory perspectives upon the role of the family within a capitalist society. These perspectives prove the above title/statement as true, these include: Early Marxist views on the family come not so much from Marx, surprisingly enough, but from Engels. Engels believes the family is shaped by the economic structure of society. This is called economic determinism. ...read more.

It is heavily linked with Engels and when monogamy was invented, so was patriarchy - the notion that men dominate women in the family and society as a whole. That woman reproduce the labour force, by socialising the next generation of workers by maintaining and servicing the current generation. Woman absorb the anger that would be directed at capitalism, Fan Ansley describes wives as 'takers of shit' who soak up the frustration their husbands feel because of alienation and exploitation they feel/suffer at work. Marists feminists see the oppression of woman in the family as linked to the exploitation of the working class. They argue that the family must be abolished at the same time as a socialist revolution replaces capitalism with a classless society. Nevertheless there are criticisms towards these perspectives. These are as follows: * The functionalists view is consensus, organic structured theory so being at the very end of the spectrum in ideologies. Though they do share similar points such as they are both macro theories, they are both interested to look at how and why people follow the rules of society and both believe that there is strong social control and order in society, there theorists think very differently. Functionalism is based on the view that society is a system of interdependent parts held together by a shared culture or value consensus (an agreement amongst society's members about what values are important). Functionalist theories assume the different parts of a society each have their own role to play (their own "function"), and work together smoothly in order to form a harmonious whole (macro). ...read more.

Another criticism, one that is fairly obvious is that both Marxists and functionalists ignore individual action and choice. The symbolic Interactionists perspective see us living in a social action society, which emphasises the extent to which people are conscious of their actions and how much individual social behaviour is the result of real choices. The social action approach believes people give meaning to their actions and those of other people and makes our own choices. So therefore, we choose to live in a family. Not capitalism, not the ruling class, but us personally do. In conclusion, from the evidence put forward I do believe that family is an institution which helps maintain the ruling class's power. I especially agree with Althusser and the ISA. I truly believe that the working class are victims of the ideological control and have the false consciousness, can not see the truth clearly. This ideological false consciousness justifies the society they live in and stops them questioning it - exploiting them. Unlike the Functionalists theories, Marxist theories towards the family seem more believable and realistic. Functionalists seem to see society as they "wish" it was, when it's not as perfect as they want to make it out to be. But life isn't perfect, and at the same time Marxists theories are pessimistic and believe that the working class are all getting exploited when there is a lot more to what determines why they are living in a family and such. Marxists have a better idea but need to take some ideas from Interactionists to get a clearer picture in my belief. ...read more.