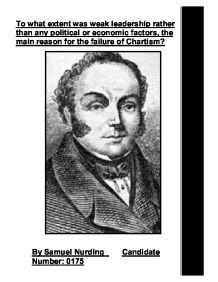 Disucss the conention that weak leadership, rather than any economic or political factor was the main reason for the failure of Chartism?

To what extent was weak leadership rather than any political or economic factors, the main reason for the failure of Chartism? By Samuel Nurding Candidate Number: 0175 Centre Number: 65217 Word count: How close did Britain come to having a major working class movement cause a full-scale political revolution in mid-Victorian England? It's an intriguing question, and historians still argue the point. It is questionable that Chartism was doomed to fail from the beginning; nonetheless, weak leadership has been blamed by many historians as a vital cause for the disintegration of the Chartist movement in 1841, but to what extent is this true? Chartism was a movement established and to an extent controlled by working men in 1836 to achieve parliamentary democracy as a step towards social and economic reform. Probably the best way to interpret the implications of the movement is to appreciate that it emerged towards the end of a long period of agitation by political outsiders. The Charter made six political demands but the organisation was naive in the belief that constitutional reform would automatically provide a better socio-economical environment. Perhaps Chartism was a matter of feeling. It was an emotional reaction against a changing economy and society, which was unjust and bewildering to the working man. Great social, political and economic changes took place between 1830 and 1850, speeded up by railways. The balance shifted from old 18th century values to new commercial values; agriculture declined as industry flourished. It was an age of paradox, to determine the 'Condition of England Question'. Chartism was a paradox because it reflected this society. It attracted its support from all those with a sense of grievance - whatever the grievance was about. During the late 1830's and early 1840's, pressure for further political reform had been building up in three main areas; Firstly, in London, the home of the original London Working Men's Association and the long-established heart of radical activity. ...read more.

This discontent brought weak leadership among the Chartist leaders. Chartist never won sufficient middle class support. Many potential backers who sympathized with the six points were frightened off by the Chartists' violence and by their attacks on wealth and property, they preferred to put money into the more respectable Anti-Corn Law League as suppose to Chartism. Additionally, these divided leadership problems and violence within physical force "alienated" the public, and caused a vast deal of confusion. Regional differences started to emerge as a result bad co-ordination within the leadership. Division was so much a condition of early working-class radicalism that to expect anything different would be idealistic. Chartism therefore was destined to be lead by "unquestionably the best-loved, as well as the most hatred man in the Chartist Movement".5 Until the 1980's, judgments about O'Connor and physical force were the main motives for causing insignificant middle class support. One opponent of O'Connor claimed that Chartism would have been the better for O'Connor's absence, 'What Chartism might have been and achieved if O'Connor had not pulled it down into the gutter it would be useless to speculate'. 6 Recently, however, O'Connor has been transformed as the essential inspiration which drove Chartism on in the demanding days of the 1840's. O'Connor was questionably the most important and significant leadership because he was able to combine elements of democracy and paternalism. To historians such as Mark Hovell and J.T.Ward, O'Connor was the man who took Chartism out of the hands of thoughtful moderates and transformed it into the victim of his own megalomania. Historian David Jones attempted to explain why O'Connor had so long been undervalued: "Resentment is at the heart of early Chartist history. Broken hopes and injured pride turned memories into thinly disguised denunciations of Chartist leadership. Men who had always been wary of excessive hero-worship attacked O'Connorites for their exaggerated claims of popular support, their obstruction and inconsistencies, and their willingness to divide the Chartist body and plunge the country into revolution" 7 Historian ...read more.

It transformed the confidence and expectations of the working people, produced top quality journalism both informed and educated and rose to the challenge of transforming artisan radicalism into something both broader and deeper, making it more effective to the rapid changed social and economic needs of the working class population in an urban, industrial culture. In conclusion, Chartism was a failure in the political world, as it made scarcely any impression at its time, even though five out of the six points did eventually pass later on. Unquestionably weak leadership was a big factor in the failure of Chartism, but other aspects such as the better life style for working class after free trade or the governments anticipating on the Chartist movements were all causes for failure. To what extent weak leadership was the main failure to the Chartist movement can only be looked that if the Chartists had good leadership then some issues might never have occurred, such as lack of middle class support, local differences or confusion with its followers, which might have helped the Chartists in achieving their aims. Whatever the divergence and the disagreement, one key point must be stressed; Chartism marked them all. It left an everlasting legacy of independence, self-determination and often caused bloody-mindedness. I believe that David Jones's assessment of Chartism catches the essence of Chartism and why it continues to matter for up to a half-century after 1848: "The history of Chartism after O'Connor's fall from power revealed....that each person had his own order of priorities, his own definition of freedom, and his own views of the relationship between power and knowledge and between the individual and the Government. For this reason Chartists reacted differently to the economic and political progress of the mid-Victorian era. Some settled down to an advanced Liberalism; some moved into independent Labour politics, and others retired in confusion and bitterness. But almost all of them retained that tough and independent spirit which made them 'Irreconcilables'. ...read more.