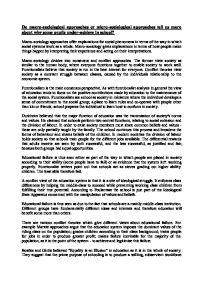 Do macro-sociological approaches or micro-sociological approaches tell us more about why some pupils under-achieve in school? Macro-sociology approaches offer explanations for social phenomena in terms of the way in which social systems work as a whole. Micro-sociology gives explanations in terms of how people make things happen by interpreting their experience and acting on their interpretations. Macro-sociology divides into consensus and conflict approaches. The former view society as similar to the human body, where everyone functions together to enable society to work well. Functionalists believe that society is run in the best interest for everyone. Conflict theories view society as a constant struggle between classes, caused by the individuals relationship to the economic system. Functionalism is the main consensus perspective. As with functionalist analysis in general the view of education tends to focus on the positive contributions made by education to the maintenance of the social system. Functionalists see school as society in miniature where the individual develops a sense of commitment to the social group; a place to learn rules and co-operate with people other than kin or friends, school prepares the individual to learn how to conform in society. ...read more.

It enforces class differences by helping the middle-class to succeed while preventing working class children from fulfilling their true potential. According to Poulantzaz the school is just part of the Ideological State Apparatus concerned with the manipulation of values and beliefs. Educational failure is thus seen as due to the fact that schools are a mainly middle-class institution. Different groups have fundamentally different ideas and interests and therefore education will benefit some more than others. There are various conflict theories which give different views about educational failure. For example Marxist approaches argue that the education system imposes the dominant values of the ruling class on the population; grades children according to their class background; trains people for jobs in order to produce greater profit; makes failure inevitable for the majority of the population, as it is the point of the system - to achieve and legitimise this failure. Bowles and Gintis believed "Equality is an Illusion" in education as it is in the whole of society. They suggest that the prime purpose of schooling is to produce a willing, subservient workforce which will continue to help make profits for the ruling class and not to challenge their dominance of society. ...read more.

Macro-sociology and micro-sociology are not necessarily inconsistent with each other. Sometimes the one can compliment the other, particularly interationism and conflict theory. For example Sharp and Green who combine structural factors such as class race, gender etc. with the activities and perceptions of teachers - the interactionist approach. After studying a progressive primary school they argue that pressures from both within the school and the wider society ensure that teachers tend to have higher expectations from middle-class pupils. Macro research reveals the higher the social class the higher the levels of educational achievement, but this approach does not take into account such factors as gender, race, religion etc. Similarly, micro-sociology describes the mechanism of educational failure rather than explaining it. Therefore it is difficult to reach a reliable explanation without analysing from both perspectives. Education is such a vast area; the question of why some pupils underachieve in school is complex and has many answers. It is therefore unfair to look at this area from just a micro or macro perspective. To really understand the reasons behind under-achievement and give accurate analysis, you need to consider all perspectives, and take into account factors such as gender, race and class. ...read more.