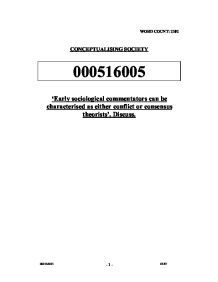 Early sociological commentators can be characterised as either conflict or consensus theorists'. Discuss.

Robert Merton fundamentally agreed with Parsons but he noted that his theory was far too generalised [Holmwood 2005:10]. Sociological thinkers like Parsons who greatly emphasise the existence of consensus are often characterised as consensus theorists based on the model of consensus that their views are built upon. Similarly, the sociologists who build theory on the model of conflict have come to be known as conflict theorists. Although functionalism emphasises the presence of consensus, it does not deny that conflict exists. Conflict is seen to be minimised as individuals accept the inevitability and necessity of social inequalities and although it is accepted it is considered to be of small importance in comparison with the need for consensus and stability. Consensus theorists argue that inequality is functional for society as it can act as a means of encouragement as well as an incentive. Therefore, it can be seen that consensus theorists start from the element of culture and then use it to explain inequality within society. This leads them to stress things like competition as being a core social value. Similarly to its functionalist counterpart, conflict theories agree that both society and culture influence individual behaviour, nearly but not to the point of determining it, by the way it structures the way individuals are able to think and act. Conflict theorists stress the extent to which individuals, groups and social classes within a society are in competition with each other for whatever it is that people consider to be important. ...read more.

Power, ideology and conflict are always closely connected. Many conflicts are about power, because of the rewards it can bring. Those who hold most power may depend mainly on the influence of ideology to retain their dominance, but are usually able also to use force if necessary. Early sociological commentators, as well as modern ones also, are characterised as either conflict or consensus theorists dependant on the dominance of these particular concepts in their work. Although conflict and consensus models appear to be widely spread in their principles more so than what they are. The two positions are by no means wholly compatible. All societies probably involve some kind of general agreement over values, and certainly involve conflict. Parsons had in fact sought to account for both power and consensus in his model. Therefore, it is difficult to argue that the two models could be kept entirely apart and used separately for different purposes. It is more realistic in fact to assume that there is a crossover between the two standpoints and that a medium would be best suited. This was illustrated by John Rex who said that "all actual cases lie somewhere along the continuum between perfect cooperation and perfect conflict" [Rex 1961:54]. However, in order to be able to understand each commentators views clearer, it is more simplistic for them to be characterised as either being conflict or consensus theorists. However, although each of the early commentators can be divided into either conflict or consensus theorists, it would be wrong to view them as solely part of this category as conflict and consensus are both apparent in any given society, be it in the past or today. ...read more.