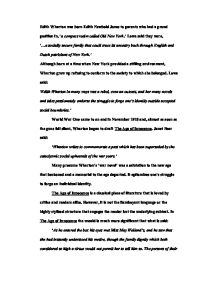 Edith Wharton was born Edith Newbold Jones to parents who had a proud position in, 'a compact realm called Old New York.'

Edith Wharton was born Edith Newbold Jones to parents who had a proud position in, 'a compact realm called Old New York.' Lowe said they were, '...a socially secure family that could trace its ancestry back through English and Dutch patricians of New York.' Although born at a time when New York provided a stifling environment, Wharton grew up refusing to conform to the society to which she belonged. Lowe said: 'Edith Wharton in many ways was a rebel, even an outcast, and her many novels and tales passionately endorse the struggle to forge one's identity outside accepted social boundaries.' World War One came to an end in November 1918 and, almost as soon as the guns fell silent, Wharton began to draft The Age of Innocence. Janet Beer said: 'Wharton writes to commemorate a past which has been superseded by the cataclysmic social upheavals of the war years.' Many presume Wharton's 'war novel' was a salutation to the new age that beckoned and a memorial to the age departed. It epitomizes one's struggle to forge an individual identity. The Age of Innocence is a classical piece of literature that is loved by critics and readers alike. However, it is not the flamboyant language or the highly stylised structure that engages the reader but the underlying subtext. In The Age of Innocence the unsaid is much more significant that what is said: 'As he entered the box his eyes met Miss May Welland's, and he saw that she had instantly understood his motive, though the family dignity which both considered so high a virtue would not permit her to tell him so. The persons of their world lived in an atmosphere of faint implications and pale delicacies, and the fact that he and she understood each other without a word seemed to the young man to bring them nearer than any explanation would have done'(chapter 2 pg 14) ...read more.

The customs of aristocratic New York in the 1870s calls for the use of representative behaviour rather than simple openness or forthrightness, and Newland understands his position within this system. While Newland is a product of the system that discourages disgrace through surreptitious action, Ellen presents another model to follow since she has adapted to the openness of European culture. Ellen brings an important perspective to the New York world. She arrives unaware of the rigid confines of behaviour in a society that tolerates no divergence from its strict rules of etiuette and social distance. Ellen finds New York society both charmingly safe and provincially rigid. She undergoes her own change. Before Ellen met Archer she lived her life in Europe according to European norms. She married a fabulously rich Polish count and lived the life of exquisite pleasures. There, life was bohemian and free. Each person lived for their own pleasure regardless of the consequences.. However her husband abused her cruelly to suit his own selfish ourposes Ellen, much like her grandmother Mrs Manson Mingott, is attracted to the unconventions of society. Ellen's dark hair and red clothing are often contrasted against May's blonde hair and white dress; she refuses to abide by the strict codes of society. Ellen could be compared to the character of Daisy Miller, a book written by Wharton's friend and fellow writer, Henry James. Daisy, like Ellen, did not abide by the social rules of the society in which she lived; she had an uncultivated manner and was direct and honest in her language. When Winterborne accuses Daisy of being a flirt at Mrs Walker's party, she agrees with him. This would be a label that the majority of women at the time would have been completely embarrassed at receiving. However, like Ellen, Daisy does not pretend and it is her refusal to keep up any sort of pretence that in the end causes her death. ...read more.

As a result of his recognition that his culture had actually saved him from a scandal that would not have allowed the happiness of his later years, and that it was not from his own doing, he can truly say that there was good in the old ways. Newland sees that the old ways provided the means for his own personal scandal to be minimized at any cost, and he is grateful for the conventions that his society had in place. For a time, he thinks that he can avoid the effects of an illicit love, but, ultimately, it is his culture that allows his marriage to survive and the happiness of his family to remain. He can proclaim the good of the former way of life because he knows how it prepared him to live a life of honesty and purity. Although Newland discovers that it is necessary to perform sacrifices, even to relinquish "the thing he most wanted", to ensure this innocence, he ultimately benefits from the standard set for him and the circumstances that force him to follow it. Wharton allows the reader to see the goodness of the lost past through the outcome of Newland's life, and the fact that he was able to remain faithful shows the undeniable success of society's ability to maintain its standards. Wharton through colourful language and a highly stylised structure reflects the ornate, conventional and conservative nature of the time but in doing this Wharton also ridicules society drawing our attention to the underlying corruption that is forever present in the lives of the dinosaurs of New York. However, could it be this corruption along with the refusal to change traditional ways that saves people in the end? Newland's life, to an extent, was corrupt owing to his lust for Ellen but his refusal to change his traditional ways meant that he had great happiness in his later years and even learned to love May. Could it be that the dinosaurs of New York who fear and rebuff change are saving society from a chaotic world of blatant promiscuity and scandal? ...read more.