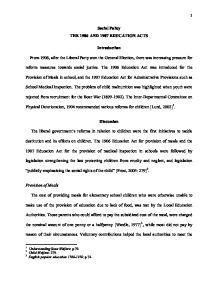 Social Policy THE 1906 AND 1907 EDUCATION ACTS Introduction From 1906, after the Liberal Party won the General Election, there was increasing pressure for reform measures towards social justice. The 1906 Education Act was introduced for the Provision of Meals in school, and the 1907 Education Act for Administrative Provisions such as School Medical Inspection. The problem of child malnutrition was highlighted when youth were rejected from recruitment for the Boer War (1899-1902). The Inter-Departmental Committee on Physical Deterioration, 1904 recommended various reforms for children [Lund, 2002]1. Discussion The liberal government's reforms in relation to children were the first initiatives to tackle destitution and its effects on children. ...read more.

Those parents who could afford to pay the subsidized cost of the meal, were charged the nominal amount of one penny or a halfpenny [Wardle, 1977]3, while most did not pay by reason of their circumstances. Voluntary contributions helped the local authorities to meet the costs of school feeding. "The state supply of school meals established an important beachhead for the subsequent development of welfare programmes" [Lund, 2002: 70]4 such as those related to medical attention, educational scholarships and several humanitarian concerns. School Medical Inspection The Education Act 1907 placed responsibility on local education authorities "to provide for the medical inspection of children on their admission to a public elementary school" [Lund, 2002: 71]5. ...read more.

The other areas covered by the 1907 Act was to allow local authorities to take charge of vocational advice to the students, and to provide play centres and other forms of recreation during holidays as well as academic classes during vacations. Further, the 1907 Education (Administrative Provisions) Act established the scholarship and free place system for secondary education with the purpose of giving promising children from elementary schools the opportunity to go to secondary schools [Gillard, 2001]6. Conclusion This paper has highlighted the significance of the Educational Acts of 1906 and 1907 with their emphasis on providing for children's nutritional and health needs. From these earliest Liberal reforms emerged further legislation in rapid succession, supporting the care and development of children in England. ...read more.