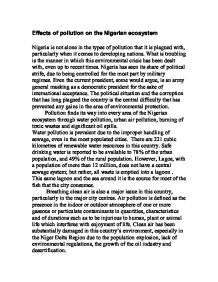 Effects of pollution on the Nigerian ecosystem

Effects of pollution on the Nigerian ecosystem Nigeria is not alone in the types of pollution that it is plagued with, particularly when it comes to developing nations. What is troubling is the manner in which this environmental crisis has been dealt with, even up to recent times. Nigeria has seen its share of political strife, due to being controlled for the most part by military regimes. Even the current president, some would argue, is an army general masking as a democratic president for the sake of international acceptance. The political situation and the corruption that has long plagued the country is the central difficulty that has prevented any gains in the area of environmental protection. Pollution finds its way into every area of the Nigerian ecosystem through water pollution, urban air pollution, burning of toxic wastes and significant oil spills. Water pollution is prevalent due to the improper handling of sewage, even in the most populated cities. There are 221 cubic kilometres of renewable water resources in this country. Safe drinking water is reported to be available to 78% of the urban population, and 49% of the rural population. However, Lagos, with a population of more than 12 million, does not have a central sewage system; but rather, all waste is emptied into a lagoon . This same lagoon and the sea around it is the source for most of the fish that the city consumes. Breathing clean air is also a major issue in this country, particularly in the major city centres. ...read more.

The people of the area disagree. They feel that the money hungry oil companies care little about the agriculture of the region, and when there is spillage, they care little about the effects it has on their livelihood. Oil spillages due to a lack of technology being implemented has also contributed to the polluting of waters around drilling sites. While in most developed countries basic technology would be implemented to prevent unnecessary spillages, in Nigeria it is not deemed as significant (Orubu et al, 2004). It is reported that the number of oil spillages from 1995-2000 was in excess of 1907 and has continued to increase (Iyoha, 2000). Perhaps the most senseless side effect of the petroleum industry is the controversial practice of gas flaring. This is the controlled burning of the waste natural gas in oil production. The main source of this is the "solution gas" which is trapped in underground oil supplies that is released when raw oil is brought to the surface. Due to the volume of this gas being less than profitable to recover or collect and sell as natural gas, it is burned off. When there is more drilling, there is more flaring. The effects of continual burning in the Niger Delta have resulted in the people of this land being surrounded by toxic air. The Federal Environmental Protection Agency (F.E.P.A.) have conducted studies on the air in this area, and it has been shown that there are moderate to high concentrations of pollutants, such as carbon monoxide, sulphur dioxide, nitrogen oxides and organic acids, all as a result of this gas flaring. ...read more.

Sewage treatment plants do not seem to top the priority list of environmental infrastructure projects. These issues, for developed nations seem to be non-negotiable. For a country as rich in resources not to prioritize clean air and drinking water for its people is not only illogical, it is inexcusable. As long as the oil industry is present in the Niger Delta region, and providing its share of profits to the Nigerian government, it is obvious that little will be done in reality. Though provisions will appear to be made to improve the state of the environment, which will likely only be for the benefit of the international media. Environmental groups and human rights activists know the truth behind the fa�ade designed by those who have a great deal to lose by making the oil executives pay what is truly owed to the people. Despite whatever changes are made, nothing will change the damage that has been done, not only to the Oguni people, but to all Nigerians. In a time when the highest levels of technology exist to do anything possible, there are people living in poverty and filth in one of the richest countries in Africa. People are bathing in raw sewage, breathing air that could be compared to noxious fumes from the tailpipe of a car, and unable to make a living from agriculture, the most basic of livelihoods. We need to ask the international community what they are doing to change this situation. Does cleaning the environment stop at demanding recycling facilities in the western world? We all need to take responsibility for the atrocities happening in Africa, and specifically Nigeria. ...read more.