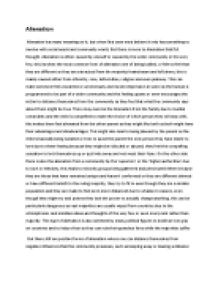 ﻿Alienation Alienation has many meanings to it, but when first seen most believe it only has something to involve with social needs and community wants. But there is more to Alienation that fist thought. Alienation is either caused by oneself or caused by the wider community or the very few, this involves the most common form of alienation one of being bullied, or felt to feel that they are different so they are ostracized from the majority/mainstream and left alone, this is mainly caused either from ethnicity, race, deformities, religion and even jealousy. This can make someone feel unwanted or unnecessary and invoke depression in some as the human is programmed to be part of a wider community and this feeling upsets or even encourages the victim to distance themselves from the community as they feel that what the community says about them might be true. ...read more.

feel even more distanced due to whatever reasons, even though they might try and protest they lack the power to actually change anything, this can be particularly dangerous as vast majorities are usually wiped from countries due to the schizophrenic and mindless ideas and thoughts of the very few or even one tyrant rather than majority. This type of alienation is also achieved by many political figures to instill an iron grip on countries and to induce fear so they can rule their grandeur lives while the majorities suffer. But there still are positive forms of alienation where one can distance themselves from negative influences that the community possesses, such as keeping away or leaving a distance for positive outcomes, there might even be the alienation from friends just to learn something in class and not be distracted, there are also minor forms of alienation such as playing online games most of the day because you get to play with people you know online rather than those that surround you. ...read more.

or a single person from the majority for whatever reasons may cause a lot of turmoil, and even cause death due to the amount of stress developed from being left out as a person does not long for riches, or beauty or strength but to be loved and accepted, but there may be the positive forms of alienation that involve distancing from negative influences for the better, to me alienation is a need and a burden, it is necessary to finish work in peace or to actually understand class work but it also connects with burden of where someone would never want to be left out of the majority just like the Thirteenth pig. Even though a person can live without alienation what the person wants is to feel like they belong and that they are loved by someone, so they can pass the same positive attitudes other than being alienated themselves and then alienating other people from their lives only because that happened to them. ...read more.

It is difficult to give feedback for this as I am not clear on which unit this work is for. Nevertheless I will give areas where the work could be improved. The lack of punctuation, specifically full stops is a problem as the readability of the work is affected. The second paragraph on page 2 for instance is (almost) one long sentence. Short sentences help in terms of structuring the ideas presented in a clear way that makes it easier for the reader to follow.
2/5