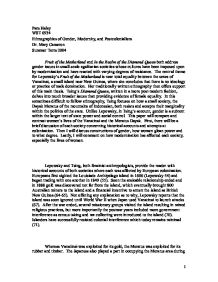 Ethnographies of Gender, Modernity, and Postcolonialism.

Pam Haley WST 6934 Ethnographies of Gender, Modernity, and Postcolonialism Dr. Mary Cameron Summer Term 2004 Fruit of the Motherland and In the Realm of the Diamond Queen both address gender issues in small-scale egalitarian societies whose cultures have been imposed upon by modernization and have reacted with varying degrees of resistance. The central theme for Lepowsky's Fruit of the Motherland is near total equality between the sexes of Vanatinai, a small island near New Guinea, where she concludes that there is no ideology or practice of male domination. Her traditionally written ethnography then offers support of this main thesis. Tsing's Diamond Queen, written in a more post-modern fashion, delves into much broader issues than providing evidence of female equality. In this sometimes difficult to follow ethnography, Tsing focuses on how a small society, the Dayak Meratus of the mountains of Indonesian, both resists and accepts their marginality within the politics of the state. Unlike Lepowsky, in Tsing's account, gender is a subtext within the larger text of state power and social control. This paper will compare and contrast women's lives of the Vanatinai and the Meratus Dayak. First, there will be a brief discussion of each society concerning historical accounts and attempts at colonization. Then I will discuss constructions of gender, how women glean power and to what degree. Lastly, I will comment on how modernization has affected each society, especially the lives of women. Lepowsky and Tsing, both feminist anthropologists, provide the reader with historical accounts of both societies where each was affected by European colonization. ...read more.

Other evidence of inequality is evident in the fact that more men than women become prominent in exchange. Although this symbol of prestige is open to women, because of child-care responsibilities, they participate much less than men. As observed in most male-dominated societies across the globe, including our own, asymmetrical child-care responsibilities often thwart women's access to power, wealth, and prestige. Finally, as the connection of women's inequality to warring societies was alluded to above, the Vanatinai women are omitted from the highly prestigious act of killing with spears precluding women from becoming the esteemed asiara, an exemplary warrior. So, despite Lepowsky's claim of a gendered egalitarian society, there are several valid arguments for disputation. Tsing's ethnography, on the other hand, does not make the claim that the Meratus Dayak women are equal to men. Instead, she emphasizes their individual claims to power within a seemingly male-dominated sphere. Meratus women, for example, realize their prominence in the practice of the umbun, a communal farm operated equally by one man and one woman who have equal autonomy in managing the operations. Most of Tsing's assertions of women's power, however, are revealed within the stories of individual informant women. For instance, she interviews Uma Adang, an exceptional Meratus woman, who commanded her power through her position of shaman, a status typically reserved for men only. Then, she retells the stories of three women who left their families, took foreign lovers and gleaned power because they chose when and how to end the relationships. ...read more.

How have cultural changes during the last 150 years affected Vanatinai women's lives since the pre-colonial period? Unlike Tsing's Meratus, modernization has had both detrimental and beneficial effects on the Vanatinai. As observed in Bell's Aboriginal Kaytej women of Australia, colonialism appears to have had detrimental effects on the status of women. This phenomenon is clear with both the Vanatinai and the Meratus Dayak. As political states tend to envision male heads of family, both societies' regional authorities have had little interest in meeting with the women. Therefore, women are excluded in community political decisions. For example, Meratus district officers attempted to distribute birth control pills through male leaders who decided limiting the number of children was ridiculous. They therefore put the pills on the shelf where they remained never to be used by the women. Had women been consulted, they might have accepted the contraception as they had previously mentioned their displeasure at having too many children. In regards to control over reproduction, Meratus Dayak women's marginality is even furthered reduced by state intervention. For example, Tsing suggests that allegedly unhealthy children are often left to die. The state began to criminalize what they perceived to be the inappropriate disposal of newborns and thus usurping the previous rights of the mother. To conclude, various factors in Vanatinai and Meratus Dayak women's lives seem to either advance or rescind women's autonomy and authority. Warfare stands out as the one variable that appears to be detrimental to women's status. This becomes even more significant when one examines issues of colonization and modernization, which, incidently, the Meratus appropriately refer to as terrorism. ...read more.