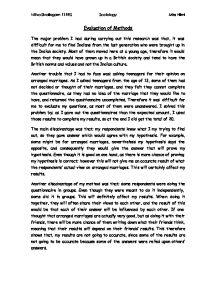 Evaluation of Methods The major problem I had during carrying out this research was that, it was difficult for me to find Indians from the last generation who were brought up in the Indian society. Most of them moved here at a young age, therefore it would mean that they would have grown up in a British society and tend to have the British norms and values and not the Indian culture. Another trouble that I had to face was; asking teenagers for their opinion on arranged marriages. As I asked teenagers from the age of 13, some of them had not decided or thought of their marriages, and they felt they cannot complete the questionnaire, as they had no idea of the marriage that they would like to have, and returned the questionnaire uncompleted. Therefore it was difficult for me to evaluate my questions, as most of them were unanswered. I solved this problem by; as I gave out the questionnaires than the expected amount, I used those results to complete my results, so at the end I did get the total of 20. The main disadvantage was that; my respondents knew what I my trying to find out, so they gave answer which would agree with my hypothesis. For example, some might be for arranged marriages, nevertheless my hypothesis says the opposite, and consequently they would give the answer that will prove my hypothesis. Even though it is good on one hand, as there is more chance of proving my hypothesis is correct; however this will not give me an accurate result of what the respondents' actual view on arranged marriages. This will certainly affect my results. Another disadvantage of my method was that; some respondents were doing the questionnaire in groups. Even though they were meant to do it independently, some did it in groups. This will definitely affect my results. ...read more.

Therefore, generalization cannot be drawn and applied to wider society based on such methods. Methodology For this research I have decided to use a questionnaire. It is a series of written questions which people have to complete it themselves. The benefit of a good questionnaire that it asks people the right questions to find the information that the researcher wants to find about, in a clear and as simple as possible and as short as possible. There are many advantages and disadvantages of using a questionnaire but also some disadvantages. The most important advantages of using a questionnaire are that; It is very useful for reaching a large number of people as they just are handed out to widely dispersed people. It reduces bias, as the researcher's opinion will not influence the participant doing the questionnaire in a certain way. And finally it will be easier for me to analyse a questionnaire compared to alternative methods. But on the other hand the disadvantages of using questionnaires are that; the questions are standardized, so the questions cannot be clearly explained, this means that the participants may misinterpret the question. Another problem is that, open ended questions can cause many problems as it may take a long time to analyse the questions. Questionnaires may be answered superficially by the respondents as it may take a long time to complete it. They may not answer it truthfully as they could think it will not be beneficial or they might even penalize by giving their real opinion about the topic. These problems can be sorted by; By making sure that the participants do not misinterpret the questions, a pilot study should be taken on a small group of participants, so that the participants fully understand the questions. The problem of large amounts of result can be reduced by limiting the space available for the students to write their answer of sample students and only survey portion of them. ...read more.

'Do you think you follow the Indian culture?' This question, from my pilot study many people found it difficult to answer this question. This is because the question is not specific enough. They were not sure in which way I meant culture, i.e. food, clothes etc. This means I have to make this question a bit more detailed by asking if they hold the traditional Indian values. This would make it clearer for people answering the question. 'What do you think about the Indian culture promoting arranged marriage?' This question would help me to see what the teenagers' opinion about arranged marriage in India. If they are against the arranged marriage then it would mean the opinion on the Indian culture is different according to what is supposed to be. The question 'why' would let me see their personal reason on what they think about arranged marriages. 'Do you think your answer will differ about arranged marriages if you were living in India?' This question would help me if their opinion on marriages would change according to the society in which they are living in. It is relevant for me to keep this question. The question 'why', would let me know how their opinion differ. From this i would be able to compare it to my sociological context and if those were the reason which made them change. Overall from both my questionnaires I made some changes to make it more relevant to my topic and easier for my respondents to easily understand the questions. One major improvement to both my questionnaires is that, at the top I should say what this research is about, this is to make my research ethical. Also, from the questionnaire for the adults at the top I should also say that they should only complete the questionnaire only if they are married. Finally at the end of the questions I should say thank-you for their time spending doing the questionnaire. ?? ?? ?? ?? Nitha Sivalingam 11RRS Sociology Miss Hilmi ...read more.