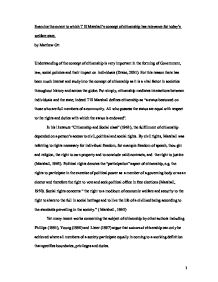 Examine the extent to which T H Marshall's concept of citizenship has relevance for today's welfare state.

Examine the extent to which T H Marshall's concept of citizenship has relevance for today's welfare state. by Matthew Ott Understanding of the concept of citizenship is very important in the forming of Government, law, social policies and their impact on individuals (Drake, 2001). For this reason there has been much interest and study into the concept of citizenship as it is a vital factor in societies throughout history and across the globe. Put simply, citizenship mediates interactions between individuals and the state; indeed T H Marshall defines citizenship as "a status bestowed on those who are full members of a community. All who possess the status are equal with respect to the rights and duties with which the status is endowed". In his literature "Citizenship and Social class" (1963), the fulfillment of citizenship depended on a person's access to civil, political and social rights. By civil rights, Marshall was referring to rights necessary for individual freedom, for example freedom of speech, thought and religion, the right to own property and to conclude valid contracts, and the right to justice (Marshall, 1963). Political rights denotes the "participation" aspect of citizenship, e.g. the rights to participate in the exercise of political power as a member of a governing body or as an elector and therefore the right to vote and seek political office in free elections (Marshall, 1950). ...read more.

If an individual refused to take up these options, they would receive no benefits, this is what is known as "Making work Pay"; a well known New Labour policy. This is another example of a change to the view of citizenship; in that recent society has seen a greater level of spending on not only benefits and rights, but New Labour have also increased spending on education on citizenship. Citizenship is now not only a topic taught to schoolchildren in modern day Britain, but is also advertised to all in society via marketing schemes which put across the idea of citizenship, one's rights and even "how to be a good citizen" ( Lavalette and Pratt, 2001, www.citizen.org.uk ) At the time of writing, the society to which Marshall was applying his theories did not encompass rights and responsibilities for women. This was for a number of reasons, firstly, women were not as large a part of the work force as they are now, and so their rights and responsibilities were not as prominent as they are in today's welfare state. They also did not have such a prolific status as men, or as they do now. This therefore proves Marshall's concept to be less relevant nowadays than at the time of writing. Gender role changes which have occurred over time have led to a different view on citizenship and this has been catalysed by various policies undertaken by recent Governments, for example child benefit, free care for working mother's children and a general move towards greater acknowledgement and justice of/for women. ...read more.

have pointed out the previously stated problem. According to Giddens, Marshall writes as if citizenship grows according to some inevitable inner logic of modernity; class struggle is hinted at by Marshall, but not really developed as a theory of social change (Faulks 1998). He failed to consider how future governments and societies would be willing to accept the inevitable cost of social rights, citizenship itself is never static but is dependant upon complex processes of social and economic change. It can therefore be said that Marshall's concept of citizenship bears a certain relevance to present day society and welfare state, yet many key features of his theory are no longer relevant, for example the role of women in work markets. Due to evolution of society, his thesis is less relevant due to the need for further rights, for example welfare rights, involving a certain level of redistribution, as put forward by Turner (1993). Yet the core of his concept, the key factors concerning citizenship are still relevant, and are possible to be applied to present day citizenship, yet for his writing to be fully relevant, additions and modifications need to be made. In conclusion, the concept of citizenship put forward by Marshall is the building block, the foundation for other theories to be cemented upon as time, society and citizenship itself evolves. This is still relevant to a certain extent, yet with changes in gender roles, governments (i.e. New Deal ), and increasing differences in culture and class (among other factors), his theory cannot be applied directly and correctly to today's welfare state. ...read more.