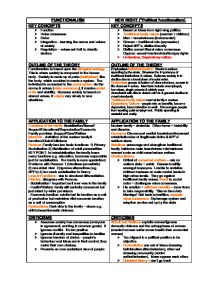 Functionalism and The New Right.

FUNCTIONALISM NEW RIGHT (*Political functionalism) KEY CONCEPTS KEY CONCEPTS > Function > Value consensus > Order > Integration - learning the norms and values of society > Regulation - values set limit to chaotic desires > Based on ideas from right wing politics > Traditional family values (married + children) > Men = breadwinners (instrumental) > Women = traditional role (expressive) > Reject SPF's, dislike diversity > Dislike current liberal value consensus- Oppose: sexual freedom/abortion/gay rights > Underclass, Dependency culture OUTLINE OF THE THEORY OUTLINE OF THE THEORY Functionalism is based upon the biological analogy. This is where society is compared to the human body. Society is made up of parts (institutions), like the body, which combine to create a system. The individual is connected to the social system via the norms & values (value consensus), it creates social order and stability. Because society is based on shared values, it adapts very slowly to new situations. Emphasises individual freedom. Wants to reduce spending by the state. Stresses the importance of traditional institutions & values. Believes society is in decline due to a breakdown of social order. Underclass: groups at bottom of class structure, access to life chances = worse. ...read more.

2 classes: Bourgeoisie (ruling class)/Proletariat (working class). Oppose each other. Bourgeoisie want to make as much profit as possible. They are the smaller group which own all of the private property and own the means of production. Proletariat = a big group who have to sell their labour power in return for a wage. They work harder and earn less money than is fair & the surplus value goes to the R.c. = CONFLICT. W.c. are paid too little & are exploited & alienated. Nothing changes because of dominant ideology which creates false consciousness. When the w.c. realise the inequality ('class consciousness') a change will occur. There will be a revolution leading to communism i.e. equality. Liberal feminism: (equal rights feminism) 1) Change bought about within society 2) Socialisation - main explanation for subordination of women 3) Men & women have equal potential 4) Liberate women by change attitudes (change in law and politics) Radical feminism: (want dramatic/revolutionary/significant social change) 1) Subordination of women is due to PATRIARCHY 2) A system whereby men dominate women 3) Men = ruling group, women = subordinate group 4) The family leads to female oppression 5) Men dominate world of work and power over women Marxist Feminism: (patriarchy and capitalism = Marxist feminism) ...read more.

Mead: "I" (evaluate/reflective/backstage) and "Me" (roles/performance/front stage) Goffman: 'dramaturgical analogy' People are social actors. Society is a process of interaction. Society is based on interpretation and negotiation, not the product of social structure. Blumer: 1) Individuals act on the basis of meaning 2) Meanings = the product of social Interaction 3) Meanings are modified and handled through an interpretative process. Rejects explanations of history and grand narratives. Concentrates on how individuals construct their own selves/identity. Post-modernity; "A state into which the world is moving which departs from the key organising principles of modernity." Post-modernists reject modernist assumptions. We are living in a period of intense and fundamental social change. Modernity is replaced. Areas of social life characterised by choice = health/religion/education/occupation/gender/marriage APPLICATION TO THE FAMILY APPLICATION TO THE FAMILY Based on construction of identity/self. Berger + Kellner: > Individuals need to make sense of and create order in the world to avoid confusion. > Marriage = crucial relationship for construction of reality and allows individuals to find opportunities for self-realisation. > In marriage - socialise each other into a shared way of seeing the world. Backett: > Sees becoming a parents as a learning process involving trial and error. ...read more.