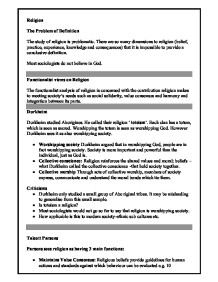 Religion The Problem of Definition The study of religion is problematic. There are so many dimensions to religion (belief, practice, experience, knowledge and consequences) that it is impossible to provide a conclusive definition. Most sociologists do not believe in God. Functionalist views on Religion The functionalist analysis of religion is concerned with the contribution religion makes to meeting society's needs such as social solidarity, value consensus and harmony and integration between its parts. Durkheim Durkheim studied Aborigines. He called their religion 'toteism'. Each clan has a totem, which is seen as sacred. Worshipping the totem is seen as worshipping God. However Durkheim sees it as also worshipping society. * Worshipping society Durkheim argued that in worshipping God, people are in fact worshipping society. Society is more important and powerful than the individual, just as God is. * Collective conscience: Religion reinforces the shared values and moral; beliefs - what Durkheim called the collective conscience -that hold society together. * Collective worship Through acts of collective worship, members of society express, communicate and understand the moral bonds which tie them. Criticisms * Durkheim only studied a small group of Aboriginal tribes. It may be misleading to generalise from this small sample. * Is toteism a religion? * Most sociologists would not go so far to say that religion is worshipping society. * How applicable is this to modern society-ethnic sub cultures etc. Talcott Parsons Parsons sees religion as having 3 main functions: * Maintains Value Consensus: Religious beliefs provide guidelines for human actions and standards against which behaviour can be evaluated e.g. 10 Commandments. These say how we ought to behave e.g. ...read more.

Manuduro argues that Chruches in Latin America promote change and instil hope. Feminists Functions: * Religion is an ideological force that helps maintain patriarchy * Perpetuates obedience and subservience of women * Women are excluded from power Women have always been the biggest consumers of religion, but on the whole have been served badly, disparaged and oppressed by the religions themselves. Daly argues that religion acts as an ideological force in a number of ways: * Religious Images * Religious Teachings * Exclusion from the Church Hierarchy * Oppression and Deception This negative perception held by many feminists has been challenged. Watson: * Veiling of women is often seen as social control. * It allows women to cope with male oppression. Reduces possibility of sexual harassment and prevents women from being judged on basis of looks. Weber Both Functionalists and Marxists emphasize the role of religion in promoting social integration and impeding social change. However, Weber, argued that in some circumstances, religion can lead to social change. In his book 'The Protestant Ethic and the Spirit of Capitalism', Weber examines the rise of a form of Protestantism known as Calvinism and the development of Western industrial capitalism. Calvinist teachings states that its members should lead a simple, but rigorous and self disciplined lifestyle. This included long hours of work and little sleep and leisure time. The main emphasis was on being single minded and trying to wealthy. Lots of hard work led to social mobility and in this way Functionalists and Marxists are challenged because Calvinism leads to change. McGuire Examines the factors that influence the type of role religion plays in society. 1. Beliefs: The beliefs of a particular religion will influence its role in society. ...read more.

The appeal of world rejecting NRM's * Wallis argues that world rejecting NRM's were attractive to young people in the 1960's because they offered a more spiritual, caring way of life. * Bruce sees their appeal as deriving from failure of the youth counter culture. Disillusioned young people sought their path to salvation through religion instead of peace and love. The appeal of world affirming NRM's * Bruce believes that world affirming movements have grown because people find it difficult to gain satisfaction and a sense of identity from their work in contemporary society. They no longer have a sense of identity from their work in contemporary society. World affirming NR's offer a solution-the offer people both success and a spiritual element to their lives. Sects Why some sects are short lived: 1. Sect membership is based upon voluntary adult commitment. Once the adults have children, the children would be too young to understand the teachings of the religion. 2. Sects normally have a charismatic leader. If he dies, the nature of leadership would change. The sect would no longer be held together by charisma. A bureaucratic denomination with a hierarchy may appear. 3. Some sects promote hard work and encourage their members to save money. The members would be socially mobile and would not wish to be part of a group created for marginal members of society. Post Modernism Post modernism = after modernity. Post modernity refers to beliefs and ways of behaving that result from living in a postmodern society. Modernity describes societies based around modern industrial production. Urban living. Acceptance of reason and rational science. Sociology is based on these modern ways of thinking e.g. * There is a social order to life * Social research can understand this order * Research can be used to make progress. ...read more.