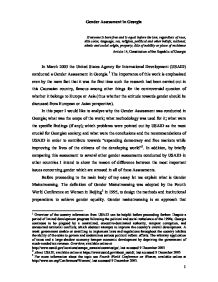 Gender Assessment in Georgia Everyone is born free and is equal before the law, regardless of race, skin color, language, sex, religion, political and other beliefs, national, ethnic and social origin, property, title of nobility or place of residence Article 14, Constitution of the Republic of Georgia In March 2003 the United States Agency for International Development (USAID) conducted a Gender Assessment in Georgia.1 The importance of this work is emphasized even by the mere fact that it was the first time such the research had been carried out in this Caucasian country, famous among other things for the controversial question of whether it belongs to Europe or Asia (thus whether the attitude towards gender should be discussed from European or Asian perspective). In this paper I would like to analyze why the Gender Assessment was conducted in Georgia; what was the scope of the work; what methodology was used for it; what were the specific findings (if any); which problems were pointed out by USAID as the most crucial for Georgian society; and what were the conclusions and the recommendations of USAID in order to contribute towards "expanding democracy and free markets while improving the lives of the citizens of the developing world"2. In addition, by briefly comparing this assessment to several other gender assessments conducted by USAID in other countries I intend to show the reason of difference between the most important issues concerning gender which are stressed in all of these Assessments. Before proceeding to the main body of my essay let me explain what is Gender Mainstreaming. The definition of Gender Mainstreaming was adopted by the Fourth World Conference on Women in Beijing3 in 1995, to design the methods and institutional preparations to achieve gender equality. Gender mainstreaming is an approach that regards gender as a critical consideration in policy planning, designation, evaluation, and decision-making processes. For further explanations let us refer to United Nations Gender Policy: "Mainstreaming a gender perspective is the process of assessing the implications of any planned action for both women and men. ...read more.

Furthermore, no specific legislation exists to prohibit discrimination against women14. As for women, they either do not know about their rights, or can not realize they (these rights) are violated, or even they are aware of the violations but lack knowledge of how to challenge the violators. And even when they know about the existing laws, traditions and customs restrict women from exercising this right. Besides, they simply do not view enforcing mechanism (court) as trustworthy instrument to achieve justice. These all are especially surprising when a researcher juxtaposes high standard of women's education in Georgia with the lack of understanding of their legal rights. This is one of major problems for women along with bride kidnapping (abduction, still widely practiced in Georgia, especially in the rural regions but acceptable for society in the capital too), divorce, domestic violence, and trafficking in persons. Strategies to empower women through public awareness of their existing legal rights and mechanisms to support legal access of women to pursue these rights are very important to eradicate all these old-fashioned traditional practices and abuse of women's humans rights. After careful consideration of all the above mentioned, it is clear that laws must be either changed or enacted in correspondence of the modern societal needs. However, this will never happen without women's adequate representation in politics, as, according to numerous feminist scholars, women can not be represented by men but only by women themselves15. Women's participation in elections and their existence on decision-making levels are highly recommended by the Assessment as well. Sadly enough, according to USAID, women in Georgia are almost invisible in the politics at the decision-making positions. This is because they are not attracted by "dirty" politics (they claim that the political climate is hostile to them) and do not view it as a mean to better their overall conditions and situation. As goes for statistics, women comply less than 35% of the total amount of party members16. ...read more.

For this, eradication of illiteracy (which is as high as 70 % in rural population, and for rural women it achieves yet higher level - 83 %) and enhancement of low education is essential26. Thus, the gender assessment for Morocco concentrates on these and related problems, unlike assessments for other countries, though I can well imagine that HIV/AIDS, domestic violence and trafficking are not dilemmas unheard of there. Now let me briefly analyze what conclusions did USAID team made after conducting the research. In fact, the conclusions were directed to two targets, one of them USAID Mission itself, and another - "Implementing Partners". For USAID Mission, the principal importance lies in requiring from all partners to supply the Mission with gender disaggregated data, which ought to be "current, readily accessible, and highlighted by the implementers in external and internal quarterly and published annual reports"27. Meeting frequently with NGOs, train them and facilitate their further understanding of gender mainstreaming issues by providing gender program analysis as well as specially designed manuals. For the Implementing Partners (different International Organizations functioning in Georgia, along with Georgian NGOs), quite a few tasks were delineated, including but not limited to gathering gender disaggregated data, analyzing differences between female and male business-owners, promoting gender equality in decision-making, lobbying for improved legislature, developing a media campaign, increasing legal aid and public awareness (especially in rural areas) about trafficking and domestic violence, training staff about the related issues, elaborating on consumer surveys and questionnaires, identifying and training of leading women in political parties, and conducting civil education campaigns28. Overall, the assessment demonstrated that "USAID/Caucasus is aware of gender mainstreaming and the relationship between improving the unequal status of women and the economic, political, and social growth of the country"29. This is very essential for such a tremendous donor organization, as USAID is for Georgia, giving the state a good opportunity to profit from USAID's significant experience, findings, and recommendations. ...read more.