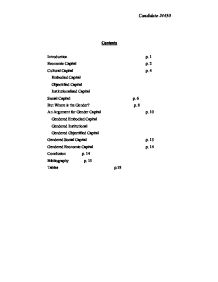 Contents Introduction p. 1 Economic Capital p. 2 Cultural Capital p. 4 Embodied Capital Objectified Capital Institutionalised Capital Social Capital p. 6 But Where is the Gender? p. 8 An Argument for Gender Capital p. 10 Gendered Embodied Capital Gendered Institutional Gendered Objectified Capital Gendered Social Capital p. 13 Gendered Economic Capital p. 14 Conclusion p. 14 Bibliography p. 15 Tables p.18 Gender Capital ? Bourdieu and Gender Inequality When Mary Wollstonecraft (1759-97) first published her 'A Vindication of the rights of Woman', in 1792, in answer to her friend Tom Paines' 'The Rights of Man', she lay the foundations of an awareness that gathered force to become the modern feminist movement. The campaign appeared to reach a public peak in the late 1970's, yet although there was a flurry of equal rights legislation, and women now no longer seem to feel it necessary to 'burn their bras', it is easy to see that 'true' equal rights and opportunities are far from realisation. In the 1990's British women still only earn between seventy-two and ninety percent of the average male wage (see table 1, Social Trends, 1998:96/7), are concentrated in the 'caring' industries that serve as an extension of their traditional role as wife and mother, and only three percent of public limited company directors are women (Watkins, Rueda & Rodriguez, 1992:168). Although the difference is declining, women are still less likely to pursue a university education than men (see table 2, Blackburn & Jarman, 1993:200), and once they have graduated the situation is still not rosy; newspapers abound not only with stories of the glass ceiling but also the glass floor (for example Carvel, 1998), so how is it that the subordinate position of women persists so long after legislation designed to 'liberate' women was implemented ? Why is it that today so many women still apparently choose to follow traditional paths ? ...read more.

at their disposal, gives a person certain advantages or disadvantages that structure their possible occupation and income, a position that they will then pass on to their children. Combined, the three forms of capital produce a persons 'habitus', or pre-disposition, a set of prescribed, embodied inclinations. In this way inequality appears to be naturalised; '...large-scale social inequalities are established not at the level of direct institutional discrimination but through the subtle inculcation of power relations upon the bodies and inclinations of the individuals' (McNay, 1999:99). Bourdieu is, therefore, able to find a balance between the economic determinism often associated with Marxist analysis, and the agency that is the individuals direct experience of life. For Bourdieu individuals are free to make their own choices, but not in circumstances of their own choosing; the amount and quality of cultural, economic and social capital that they possess informs those choices, structures their mode of thought. The 'field' refers to the domain, or social context, in which a specific habitus may be realised; knowledge regarding the use of computers may be of little use in the world of show jumping, but of uppermost importance to those involved in computer programming. Likewise, maintaining a network of computer programmers would be of little use to those outside this specific field. Bourdieu recognised that academia is one such field and would therefore be ultimately embedded in, and reflect, social relations. Bourdieu also discusses the concept of 'symbolic violence' which refers to the forceful nature of INY-BUMSKKDZ ___WORKGROUP _"_TINY-BUMSKKDZ ___DEFAULT _____�_�(__________________________________________________________9ce' (Krais, 1993:168). To name a thing as female is to name it as subordinate, and '...it is clear that the symbolic aspects of social practise are an essential part of the repression of women' (Krais, 1993:158). But Where is the Gender ? There have been numerous critiques of Bourdieus' theory of cultural capital, and several studies have sought to either prove or disprove the effect that Cultural capital may have on a child's education (Cooper & Dunne, 1998) ...read more.

Their culturally constructed role as primary care-givers is often perceived by employers as a reason not to promote, or even employ, them. Concentrated in low status, low pay, part-time employment women, and their children, constitute the most economically disadvantaged group. Conclusion The three forms of capital, as outlined by Bourdieu, interact to structure not only peoples life opportunities but also their modes of thought, and gender cuts across all of the three forms of capital. Whilst some have therefore discussed a 'gendered habitus' (McCall, 1992 & Laberge, 1995) it seems more realistic to advocate the study of a 'Gender Capital'2, for this capital is imbued before all other forms of capital, and structures the way the other forms of capital are realised. In the same way that patriarchy existed long before the advent of capitalism, so Gender Capital informs the accumulation of social, cultural and economic capitals. A child is gendered before it learns to speak. The gender capital gained as a child has repercussions throughout life; an infant that learns to be a woman will find that her femininity is both a constraint and an enabler, her habitus is gendered, as is her future. By learning to be a woman, she unwittingly reproduces the system that subordinates the feminine; by choosing the forms of education and employment that she does; by adopting the behaviour considered suitable for her sex and teaching this to her daughter, a woman plays an important role in the continuation of the existing social hierarchy. This social hierarchy is a sociocultural construction, it is not related to biological factors, it is a hierarchy conceived, constructed and reproduced in the cultural sphere, though it is naturalised to such a degree that biology is often given as the main causal factor. If feminists wish to change the existing status quo, they must first seek to understand how gender identity is transmitted, and then seek to change the culture that creates such a difference between the expectations and status of men and women. ...read more.