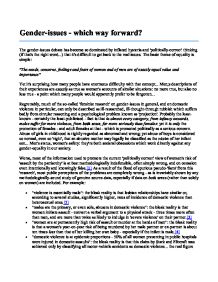 Gender-issues - which way forward? The gender-issues debate has become so dominated by inflated hysteria and 'politically-correct' thinking (if that's the right word...) that it's difficult to get back to the real issues. The basic theme of equality is simple: "The needs, concerns, feelings and fears of women and of men are of exactly equal value and importance" Yet it's surprising how many people have enormous difficulty with that concept... Men;s descriptions of their experiences are exactly as true as women's accounts of similar situations: no more true, but also no less true - a point which many people would apparently prefer to be forgotten... Regrettably, much of the so-called 'feminist research' on gender-issues in general, and on domestic violence in particular, can only be described as ill-researched, ill-thought-through rubbish which suffers badly from circular reasoning and a psychological problem known as 'projection'. Probably the least-known - certainly the least-publicised - fact is that in almost every category, from infancy onwards, males suffer far more violence, from both sexes, far more seriously than females: yet it is only the protection of females - and adult females at that - which is promoted politically as a serious concern. Abuse of girls in childhood is rightly regarded as abnormal and wrong; yet abuse of boys is considered so normal, even so 'right', that an abusive mother may legally be classified as the victim of her infant son... Men's status, women's safety: they're both societal obsessions which work directly against any gender-equality in our society. Worse, most of the information used to promote the current 'politically correct' view of women's risk of 'assault by the patriarchy' is at best methodologically indefensible, often simply wrong, and on occasion even intentionally and knowingly false.[1] As a result of the flood of spurious pseudo-'facts' from this 'research', most public perceptions of the problems are completely wrong - as is invariably shown by any methodologically-sound study of genuine source-data, especially if data on both sexes (rather than solely on women) ...read more.

Yet, again, whilst enormous work has been done in the past few decades to counter the women's side of this stereotype, the male side has, if anything, been reinforced. There are constant demands that men should say what they feel - but are actively silenced or denigrated if they do. The Melbourne journalist Terry Lane commented that the instant response of his wife and daughter to his innocuous comment that he'd 'like to climb the Himalayas whilst he still had the knees to do it it' was "You don't feel that! You can't feel that! You shouldn't feel that! You have no right to feel that!" - the notion that he actually did feel that was simply not permitted to exist. Yet our feelings are our link into reality: if our feelings are constantly denied by others - if we are constantly told that we do not feel the feelings we actually experience - we slowly lose touch with reality, and may eventually go insane. In many ways, this is actually the so-called 'normal' experience of most males, especially in mother-dominated or mother-only households... yet our society 'blames the victim' in these cases because they are male... More disturbing is that many self-styled 'feminists' have argued, either implicitly or even explicitly, that women have an inalienable right to abuse males, on the assumption that men have no feelings, therefore cannot be hurt, therefore must accept whatever abuse any woman cares to dish out (for example, Dale Spender's oft-repeated exhortation to "insult at least three men a day, on principle, to keep them in their place"). The reality, as shown in a Australian national study, is that adult males experience at least as much psychiatric illness arising from abuse as women, and adolescent males at least twice as much psychiatric illness arising from abuse - yet support services are reserved almost exclusively for women, on the assumption that men's feelings simply do not matter... ...read more.

For details of the situation for women thirty years ago, see Erin Pizzey, Scream Quietly Or The Neighbours Will Hear; as Pizzey herself now argues, the situation was always much the same for both women and men, but whilst support for women has radically improved, that for men has radically worsened - a result, for the most part, of intense lobbying and intentional misinformation by self-styled 'women's organisations'. [back] 7. Again, Christina Hoff Sommers' Who Stole Feminism? provides detailed analysis of many examples. [back] Notes from visitors From: diane simard ([error: sidi544]) Date: 10-Oct-2003 gender issues l will get to you for the lucky there is no winners what you see is wwhat you get when you look please at least look with 2 wide open eyes and you will be surprise that women and children are getting miettes (french) of bread that is a good looking for the politically correct that is all now is there any solutions yes there are but the price is very very high and not politically correct and probably people around you won t like it you bet never never forget books contains half thruth (50%) l do have to get the rest which is my own conclusion and something l will live with like a blanket see you next comments l will get bak to you shorthly l do believe equally chance 50% for women 50% for men it is possible but many works From: I'm a guy, Date: 25-Oct-2003 and this article makes me uncomfortable I think feminist-sympathetic men need to be able to say what they think. Unfortunately, this piece is gratuitously hostile and bitter. Calling newspaper stories about women \"ludicrous\" looks like misogyny to me. The author needs to get his shit together. Let women figure out what \"feminism\" is. Men should claim some other term. I think \"egalitarianism\" is a pretty good word. ...read more.