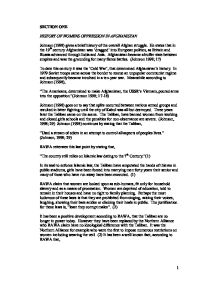 History of womens oppression in Afghanistan.

SECTION ONE HISTORY OF WOMENS OPPRESSION IN AFGHANISTAN Johnson (1998) gives a brief history of the overall Afghan struggle. He states that in the 19th century Afghanistan was 'dragged' into European politics, as Britain and Russia advanced through India and Asia. Afghanistan became a buffer state between empires and was the grounding for many fierce battles. (Johnson 1998; 17) To date this century it was the 'Cold War', that determined Afghanistan's history. In 1979 Soviet troops came across the border to rescue an unpopular communist regime and subsequently became involved in a ten-year war. Meanwhile according to Johnson (1998), "The Americans, determined to make Afghanistan, the USSR's Vietnam, poured arms into the opposition."(Johnson 1998; 17-18) Johnson (1998) goes on to say that splits occurred between various armed groups and resulted in bitter fighting until the city of Kabul was all but destroyed. Three years later the Taliban came on the scene. The Taliban, have banned women from working and closed girls schools and the penalties for non-observance are severe. (Johnson, 1998; 29) Johnson (1998) continues by stating that the Taliban, "Used a stream of edicts in an attempt to control all aspects of peoples lives." (Johnson, 1998; 29) RAWA reiterates this last point by stating that, "The country still relies on Islamic law dating to the 7th Century."(1) In its zeal to enforce Islamic law, the Taliban have amputated the hands of thieves in public stadiums, girls have been forced into marrying men forty years their senior and many of those who have run away have been executed. (1) RAWA claim that women are looked upon as sub-humans, fit only for household slavery and as a means of procreation. Women are deprived of education, told to remain in their houses and have no right to family planning. Perhaps the most ludicrous of these laws is that they are prohibited from singing, raising their voices, laughing, showing their bare ankles or clicking their heals in public. ...read more.

Through their usage of photographs (8), documents (9) and even objectives (12) the Taliban and Northern Alliance seem to be the main cause of problems. For example one of RAWA's objectives state, "To struggle against any types of fundamentalists and their masters." (12) The words 'struggle' and 'against', path negative images for the remainder of the sentence, 'fundamentalists' and 'masters'. 3) Targets of influence, Snow et al. (1981) claim that effective mobilisation requires a more negatively evaluated target of opposition. RAWA create the belief that the fundamentalists will destroy Afghanistan. Their targets in order to create this belief is statistics on how many people have died, how many refugees fundamentalist rule has created and in general the disastrous effects of their rule. (16) 4) Probability of change, Snow et al. (1981:215) note that social action is contingent on anticipated outcomes and optimism about the outcome of a collective challenge will enhance the probability of change. Through creating an agency frame RAWA has identified a positive probability of change. As previously mentioned they have established hostels, schools, hospitals, employment and international recognition, which are all aspects that promote the probability of change. (6) RAWA fail to emphasis aspects where agency has failed. They tend instead to amplify causality and blame. (9) 5) Necessity of standing up, Snow et al. (1981: 216) claim that frame amplification is needed to increase collective action and that it is micro-mobilisation efforts, which amplify this. Beliefs about the necessity refer to beliefs about the instrumentality of one own efforts in pursuit of the movements objective. RAWA use a pessimistic tone in creating this effect. For example one of their motto's is, 'You are not free until all women are free'. (20) This helps to create a sense of responsibility so potential participants will see their involvement as a moral obligation. (Snow et al., 1981: 216) Freeman and Gamson (1979: 32) ...read more.

(11) RAWA have also transformed domain specific and global interpretive frames. They have organised to promote hardships previously accepted in Afghan society to be unacceptable (12) and (do something on the master frame) SECTION THREE RAWA through their activities have been exposed as a threat to the 'they', the Northern Alliance fundamentalists. Through their activities (6) they have created a sense of agency to the 'we'. RAWA have appropriated mobilisation and increased the threat. They have increased opportunity for themselves through a system of brokerage, which increases the possibility of collective action and subsequently increases the threat to the Northern Alliance. WHICH APPROACH BEST CHARACTERISES IT? NEW SOCIAL MOVEMENTS RAWA show a lot of the signs of 'new social movements'. RAWA like new social movements acquire rights not power and their goals are about freedom of expression. (12) New social movements like RAWA stress symbolic action and action is not inclined towards economic values but quality of life. RAWA are attempting to regain their robbed identity of women of Afghanistan as equal citizens. (12) COLLECTIVE BEHAVIOUR Smelser (1962) claims that collective behaviour comes from problems of integration in structures in society. He claims that there are mass societies detached from normal society and that movements grow as group become alienate. (Lecture Notes 3/10/02) Marx and Mc Adam (1994: 5) claim that collective behaviour can mean a challenge to unjust authority. This all seems very relevant to RAWA, who state that in Afghan society women are the alienated and RAWA attempt to change this through challenging the unjust fundamentalist authority. RESOURCE MOBILISTION RAWA in resource mobilisation would come under Tilly and Gamson's 'Political Process Approach'. RAWA recognise that they cannot achieve their goals through democratic political means and so became a social movement. Mc Carthy and Zald (1973, 1977) state that resource-mobilisation was conceived as a response to those who saw social movements as resulting from discontent in society. (Marx and Mc Adam, 1994: 81) RAWA obviously formed as they were discontented with the unequal situation in Afghanistan. ...read more.