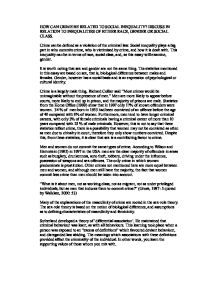 How Can Crime Be Related To Social Inequality? Discuss In Relation To Inequalities of Either Race, Gender or Social Class.

HOW CAN CRIME BE RELATED TO SOCIAL INEQUALITY? DISCUSS IN RELATION TO INEQUALITIES OF EITHER RACE, GENDER OR SOCIAL CLASS. Crime can be defined as a violation of the criminal law. Social inequality plays a big part in who commits crime, who is victimised by crime, and how it is dealt with. This inequality can be in terms of race, social class, and, as this essay will examine, gender. It is worth noting that sex and gender are not the same thing. The statistics mentioned in this essay are based on sex, that is, biological difference between males and females. Gender, however has a social basis and is an expression of psychological or cultural identity. Crime is a largely male thing. Richard Collier said "Most crimes would be unimaginable without the presence of men." Men are more likely to appear before courts, more likely to end up in prison, and the majority of prisons are male. Statistics from the Home Office (1999) show that in 1997 only 17% of known offenders were women. 34 % of men born in 1953 had been convicted of an offence before the age of 40 compared with 8% of women. Furthermore, men tend to have longer criminal careers, with only 3% of female criminals having a criminal career of more than 10 years compared with 25 % of male criminals. ...read more.

In 17th century England unmarried mothers were imprisoned because their children were dependent upon the parish, and in the late 1600s homeless women and those with several illegitimate children were sent to American colonies. These punishments served to reinforce the attitudes of how women should behave; those who didn't adhere to these roles were subject to the "fallen woman" stigma. Freedman (1981) identified a growing rate of women in prison between 1815 and 1860. This could be linked to social change, especially urbanisation. Behaviours such as drunkenness, idle and disorderly conduct and vagrancy increased for both sexes, but women were more likely to be convicted due to strict moral codes. There were fewer job opportunities and lower wages for women which lead to female economic marginalisation. Women who couldn't afford to support their families often turned to prostitution. Several theories attempt to explain the increase in female criminality. Lombroso (1900) suggested a theory of social Darwinism in the late 19th century. He believed that biology was a determining factor; a woman's biology determines her characteristics, particularly aggression. He claimed that biologically, women are unfit for criminal activity and therefore women who do commit crime must be pathological. He suggested that for a woman to stray from the "normal" path of "maternity, piety and weakness... ...read more.

Men often give the defence that women don't know what they want, and might be unconsciously asking for it. They often get away with it due to the attitude that women cannot make rational decisions and therefore it is reasonable that the decision is made for them. However, demanding equality in the criminal justice system does not bring positive results. In America, in the mid 1980s, they introduced sentencing guidelines which were neutral with respect to offenders' race, sex, national origin, creed, and socioeconomic status. They were looking for a move from making the punishment fit the criminal to the punishment fitting the crime. This was interpreted in court to mean that women's sentencing should be identical to men's in the respect that there's no consideration to whether a man has children or not. However, women are more often the caretakers of children and so in a single parent family this causes disruption in a child's life. The problem is that they were equating equality with justice. Gender neutrality in the criminal justice system will not remove gender bias as society is not gender neutral. In conclusion, crime is unequal in terms of gender, and will be for as long as roles, stereotypes, and the circumstances in which people find themselves in remain different for either sex. ...read more.