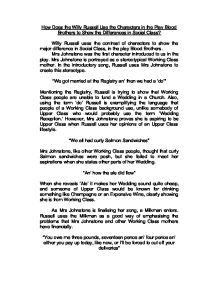 How Does the Willy Russell Use the Characters in the Play Blood Brothers to Show the Differences in Social Class?

How Does the Willy Russell Use the Characters in the Play Blood Brothers to Show the Differences in Social Class? Willy Russell uses the contrast of characters to show the major difference in Social Class, in the play Blood Brothers. Mrs Johnstone was the first character introduced to us in the play. Mrs Johnstone is portrayed as a stereotypical Working Class mother. In the introductory song, Russell uses Mrs Johnstone to create this stereotype. "We got married at the Registry an' then we had a 'do'" Mentioning the Registry, Russell is trying to show that Working Class people are unable to fund a Wedding in a Church. Also, using the term 'do' Russell is exemplifying the language that people of a Working Class background use, unlike somebody of Upper Class who would probably use the term 'Wedding Reception.' However, Mrs Johnstone proves she is aspiring to be Upper Class when Russell uses her opinions of an Upper Class lifestyle. "We all had curly Salmon Sandwiches" Mrs Johnstone, like other Working Class people, thought that curly Salmon sandwiches were posh, but she failed to meet her aspirations when she states other parts of her Wedding. ...read more.

Mrs Lyons Family have never needed anything they couldn't have, whereas Mrs Johnstone always needs things she is unable to get, this is common amongst Working Class families. People in Working Class backgrounds tend to have more children. "Having babies is like clockwork to me" This emphasises the fact that people from Working Class backgrounds are so used to having children, they don't need to change their daily routine. Further on in the play, Russell establishes superstition, to add to the creation of the Social Class backgrounds. This becomes evident soon after Mrs Lyons has entered. "Jesus Christ Mrs Lyons, what are y' trying to do?" Here Russell cleverly used this, to reveal how Mrs Johnstone, and other mothers in a similar situation to her, feel they need to rely on good luck for good things to happen to them. After this, Mrs Lyons, uses her superiority to manipulate Mrs Johnstone to her advantage. "With two more children how can you possibly avoid some of them being put into care-surely it's better to give one child to me" Russell uses this to Juxta Pose both characters, in the next song. ...read more.

Using this Russell proves that manipulation is yet again sinking in. "We'll look in the catalogue next week." Further on in the play, Mrs Lyons and Mrs Johnstone seem to swap roles. "I'll tell someone...I'll tell the Police" As Mrs Lyons has an Upper Class status, the police seem to be more lenient with her, unlike Mrs Johnstone, whose family are continually in and out of trouble. Again this is showing the disrespect to people of Social Class. Mrs Lyons sees the Police as a major threat, as her squeaky clean reputation will be ruined. "I Got y' an' y' bloody know it" Here, when Linda is introduced, you can immediately sense that she too is from a Working Class background, because she is with Sammy, who uses language such as 'bloody', although he is still a child. WHY DIDN'T YOU GIVE ME AWAY MAM! I COULD HAVE BEEN. I COULD HAVE BEEN HIM! NO! This end selection of dialogue shows how both classes are set so far apart. Russell shows this by using this speech. This is emphasising that the way you are when you grow up, how you are treated, the way you're spoken to and the things you have, are all down to the Class in which you're brought up in. ?? ?? ?? ?? ...read more.