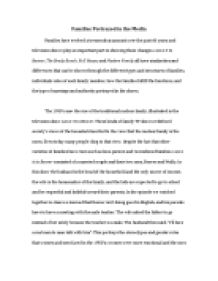 How Families Have Been Portrayed in the Media

﻿Families Portrayed in the Media Families have evolved a tremendous amount over the past 60 years and television shows play an important part in showing those changes. Leave it to Beaver, The Brady Bunch, Full House, and Modern Family all have similarities and differences that can be shown through the different types and structures of families, individuals roles of each family member, how the families fulfill the functions, and the type of marriage and authority portrayed in the shows. The 1950's saw the rise of the traditional nuclear family, illustrated in the television show Leave it to Beaver. These kinds of family TV shows redefined society's views of the household and led to the view that the nuclear family is the norm. Even today many people cling to that view, despite the fact that other varieties of families have risen such as lone-parent, and recombined families. Leave it to Beaver consisted of a married couple and their two sons, Beaver and Wally. In this show the husband is the head of the household and the only source of income, the wife is the homemaker of the family, and the kids are expected to go to school and be respectful and faithful toward their parents. In the episode we watched together in class we learned that Beaver isn?t doing good in English, and his parents have to have a meeting with the male teacher. ...read more.

During the episode we watch in class I noticed that the roles of the children changed. For example, it was not expected of the kids to do chores, so when the maid saw them all cleaning the yard to make their parents happy she was taken aback. Even though The Brady Bunch was not like other family TV shows, the higher authority of the father stayed the same. In the episode, the wife wanted to check on the kids because she felt like something was not right, however the husband disagreed and told her to stay downstairs. This showed the dominant power that the father still had over the wife in TV shows. Also, an example that shows that the functions of the family is fulfilled is when both the parents reassure their kids that they would never write a rude column in the newspaper about their family because they love each other. This let the kids know that their parents would also provide affective nurturance for them. Full House was a late 1980?s show that was also seen as a non-traditional family. In the show, the widowed father Danny goes to work and raises his three daughters up with the help of his close friend Joey, and brother-in-law Jesse who all live under one roof. ...read more.

The Dunphy family shows that the roles of the father has continued to be more tolerant and passive aggressive, similar to the father in Full House. For example, when the son shot his sister with a toy BB gun, the father only said, ?buddy, uncool? to his son. This shows that fathers are more lenient and acceptive of bad behaviour in today?s society. Also, now we see that both parents are working in the nuclear family. Some family functions that these 3 families show us is the new addition of new family members; the same-sex marriage couple adopted a child from China which helps the population grow in their area. Also, the mother in the Dunphy famiy is always doing household chores like doing the laundry and making her family dinner, this shows that the mother provides physical care for the members in her family. Lastly, the mother in the Pritchett family tells her son that she loves that he writes poems and that he?s sensitive, this encourages him to be himself, which provides affective nurturance from the mother to the child. In conclusion, families have changed an extensive amount over the years and TV shows do a great job in indicating those changes by showing the differences and similarities in the family, such as, the kind of family and structures there are, individual roles each person has inside the family, how the families achieve the functions, the type of relationship the partners have, and their authority in the household. ...read more.