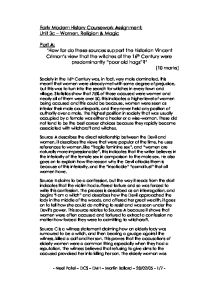 'How far do these sources support the historian Vincent Crimon's view that the witches of the 16th Century were predominantly &quot;poor old hags&quot;?'

Early Modern History Coursework Assignment: Unit 3c - Women, Religion & Magic Part A: 'How far do these sources support the historian Vincent Crimon's view that the witches of the 16th Century were predominantly "poor old hags"?' (10 marks) Society in the 16th Century was, in fact, very male dominated, this meant that women were already met with some degree of prejudice, but this was to turn into the search for witches in every town and village. Statistics show that 75% of those accused were women and nearly all of them were over 50, this indicates a higher level of women being accused and this could be because, women were seen as inferior their male counterparts, and they never held any position of authority over a male. The highest position in society that was usually occupied by a female was either a healer or a wise-woman. These did not tend to be the best career choices because they rapidly became associated with witchcraft and witches. Source A describes the direct relationship between the Devil and women, it describes the views that were popular at the time, he uses references to women, like "fragile feminine sex", and "women are naturally more impressionable", this indicates that the writer believes in the inferiority of the female sex in comparison to the male sex. He also goes on to explain how the reason why the Devil attacks them is because of this inferiority, and the "insatiable" "carnal lust" that all women have. Source B claims to be a confession, but the way it reads from the start indicates that the victim had suffered torture and so was forced to write this confession. ...read more.

Robert Muchembled is another historian whose view agrees with Norman Cohn's, but he also believes that the witch-hunts were used as a tool to suppress popular culture, by forcing rural communities to adapt 'urban values'. He believes that there was a desire to purify society and this was a direct result of the Reformation because it made rulers want to prove their faith and purity. These views are often challenged by the views of feminist historians, who believe that it was a direct suppression of women that actively opposed male authority. Robert Muchembled would argue that, the reason why the majority of the accused were female was because they were believed to be the 'upholders' of popular culture. Interestingly, Christina Larner argues that following the Reformation Christianity became a political ideology; Rulers feeling it was necessary to prove their Religious preference, therefore using it as a political tool to enforce conformity and this supports Norman Cohn's view to explain the witch-hunts as politically motivated. She also argues that, countries needed to justify the time and effort spent trying to catch witch, and so had to prove the great threat that they posed to the state, the church and God, this was essentially important as most of those accused were elderly poor women who were extremely vulnerable. In France, they developed an early understanding of what a witch was, and played a role in shaping the notion of a witch in surrounding areas. This early link between heresy and the Devil meant that France was one of the first countries to experience the witch-hunts spreading in a panic across the country. In the more centralised areas of France, the courts tended to be more lenient to the accused, however if the accused was put on trial in a smaller community the outcome would usually be worse, usually a forced confession by torture. ...read more.

In Spain, the witch-hunts developed late and were mainly in the 17th Century, some historians believe that the notion of a witch was definitely influenced by the French and had spread across the border often from direct contact or experience. Spain did not always accuse the stereotypical witch, many of them were not even elderly, and however there were still over 5000 accusations in Spain, those who accused others would often escape harsh punishment themselves. A senior Judge called Salazar, was renown for being more objective and only convicting on actual evidence, and tended to ignore the forced confessions presented to him. He also investigated the actual case by questioned the link between the events and 'maleficia'. He actually had a legal background, whereas most judges had a theological background, and whilst he was alive managed to convince others to work as he did. He once said "neither witches nor bewitched until written and talked about" this was a clear message, and it can compared to the saying ' innocent until proven guilty', this quote proves the way that he thought and carried out his investigations. In conclusion, the witch-hunts cannot be simply explained by one cause or event that triggered the start, but is a collection of reasons that built-up and finally exploded in an upsurge of witchcraft persecution. However, many historians believe in polycausal explanations and not many of them agree on every aspect of the causes, and I think that they are all right in their own respects. It can be argued that the upsurge of witchcraft persecution was a complete mixture of all the points that have been argued above. (Part A: 769 words) (Part B: 2,078 words) (Total words = 2,847) - Neel Patel - DCS - EMH - Martin Ballard - 28/02/05 - 1/7 - ...read more.