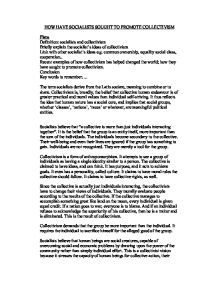 How Have Socialists Sought To Promote Collectivism

HOW HAVE SOCIALISTS SOUGHT TO PROMOTE COLLECTIVISM Plans Definition: socialists and collectivism Briefly explain the socialist's ideas of collectivism Link with other socialist's ideas e.g. common ownership, equality social class, cooperation.. Recent examples of how collectivism has helped changed the world; how they have sought to promote collectivism. Conclusion Key words to remember.... The term socialists derive from the Latin sociare, meaning to combine or to share. Collectivism is, broadly, the belief that collective human endeavour is of greater practical and moral values than individual self-striving. It thus reflects the idea that human nature has a social core, and implies that social groups, whether 'classes', 'nations', 'races' or whatever, are meaningful political entities. Socialists believe that "a collective is more than just individuals interacting together". It is the belief that the group is an entity itself, more important than the sum of the individuals. ...read more.

And if an individual refuses to acknowledge the superiority of his collective, than he is a traitor and is eliminated. This is the result of collectivism. Collectivism demands that the group be more important than the individual. It requires the individual to sacrifice himself for the alleged good of the group. Socialists believe that human beings are social creatures, capable of overcoming social and economic problems by drawing upon the power of the community rather than simply individual effort. This is a collectivist vision because it stresses the capacity of human beings for collective action, their willingness to and ability to pursue goals by working together, as opposed to striving for personal self-interest. Most socialist for instance, would be prepared to echo the words of the metaphysical [poet john donne (1571-1631); no man is an island entire of it's self; every man is a piece of the continent, a part of the main;... ...read more.

In a long standing philosophical debate about whether nature or nurture determines human behaviour, socialists resolutely side with nurture. Liberals and conservatives often argue that, at heart, human beings are essentially seeking and egoistical. Socialists on the other hand, regard selfish, acquisitive, materialistic or aggressive behaviour as socially conditioned rather than natural. Collectivism leads to equality, cooperation, common ownership, and also creates a sense of belonging. Everyone starts at the same time, and finishes at the same time with the same benefits. Wealth is then distributed to everyone equally. this therefore creates common ownership, it also creates a sense of belonging as everyone has everything in common .socialists have sought to promote collectivism by creating welfare state in the uk, thereby removing some forms of class discrimination, e.g. education, health, pension, etc .however, capitalism still exists in the uk, so the introduction of a welfare state cannot remove the class differences in the society. Also, in the world, socialists have sought to promote collectivism by helping poorer countries by contributing to their economy both financially and materially. ...read more.